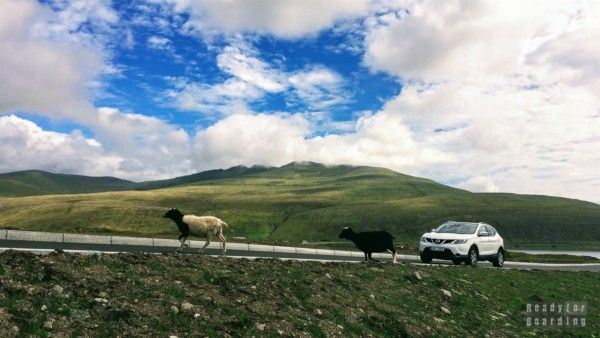 Faroe Islands – where there are more sheep than people

The Faroe Islands are an archipelago full of sheep, rain and wool sweaters. To some it may be associated only with the famous slaughter of grindwalas, while to others it is one of the safest, yet most expensive places in Europe. How it is in reality?

In the next few posts, we will introduce you to this remote archipelago and dispel some myths…

What we will associate the Faroe Islands with?

Above all, with beautiful landscapes, wilderness and surrounding silence from everywhere.

We haven't been to such a scenic and safe place since our trip to Iceland (the Azores are right next on the podium). And one wants to start describing, praising and inspiring everything right away, but there will be time for everything 🙂

At Faroe Islands We were a week – on the one hand, it's enough to see the most beautiful places, and on the other hand, it's definitely not enough to see everything, walk most of the trails, learn more about the culture, o Farers (or Farerach as you prefer), see every island, etc. We've seen a lot, we've also read a lot and still we still have some sort of insufficiency. But let's start at the beginning.

The Faroe Islands are a small archipelago in the Norwegian sea, above the UK. This is important because many people have no idea where these islands are located at all. They may sound a bit exotic, and in fact they are very close (a flight from Copenhagen takes about 2 hours).

Despite being a dependent territory of Denmark, it is not part of the European Union and the Schengen zone, so those coming from Poland need a passport (!).

The archipelago includes 18 islands of volcanic origin, but this does not mean that we will see extinct volcanoes here. Instead, we will see majestic cliffs (highest in Europe!), fjords, valleys, fishing towns in coves, lots of waterfalls. Views not from this earth guaranteed (unfortunately, clouds and rain are also guaranteed). 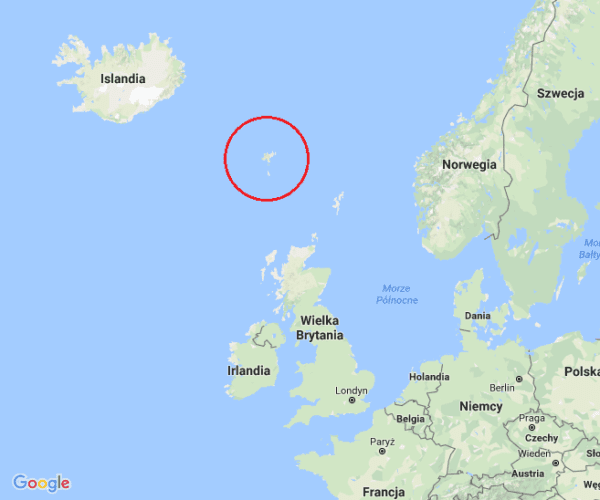 Why the Faroe Islands?

Reasons to go to Føroyar was plenty.

It started with one beautiful photo we came across on Instagram. It was a photo to which the reaction was along the lines of: Oh mother, where is it and how much do airline tickets cost there?! – you also have so? 😉

>>> We also recommend our eBook "Faroe Islands" for only PLN 19.99! All in one place, and in it 149 pages full of inspiration, descriptions and practical advice.

Later we started looking, looking through photos, reading. With each new website and blog report we were more and more convinced that we would fly there no matter what. The whole thing was topped off by Remigiusz Mroz's (a.k.a. Ove Løgmansbø) trilogy about the Faroe Islands, and no one knew when and we were already reaching for the credit card to pay for the plane ticket. 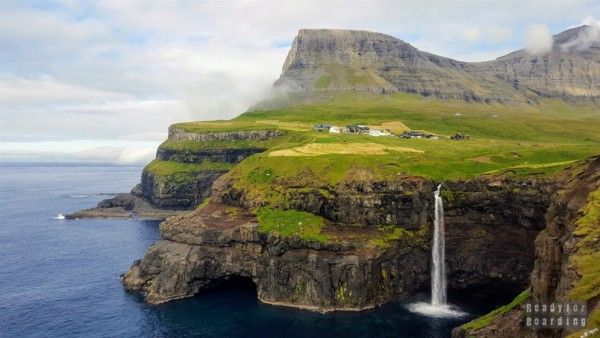 Do you remember how we ineptly searched for canaries in the Canary Islands? Fortunately, sheep are plentiful in the Faroe Islands – or at least that's what it initially seems to any tourist visiting the archipelago. The name obliges.

As soon as we got into the car appeared on the side of the road the first animals that quickly ran across the road. And such views accompanied us throughout the trip. By the roads, on the trails, around the house – sheep and rams everywhere. No wonder, there are more of them than inhabitants of the archipelago!

The population of the Faroe Islands is over 50,000, and there are 75,000 – 78,000 sheep here (efforts are being made to keep the number of sheep just within these limits). And it is too little! Not enough to feed the Faroese community. Increasing that number can have a dire effect on the ecosystem here, so mutton is often densely imported from Iceland and New Zealand (yes, you read that right – from the end of the world.). 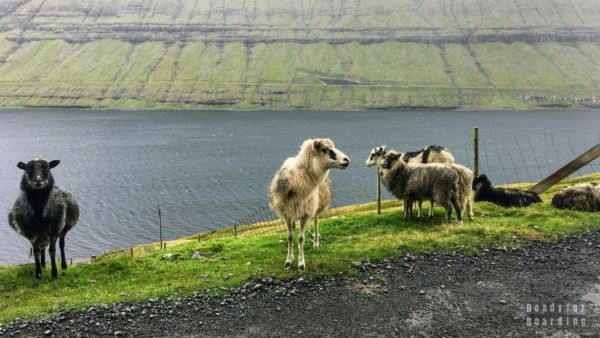 Popular, of course, is sheep's wool, which is used to make sweaters, hats, gloves, so popular in souvenir stores (correction: in stores near the tourist information, because we could count souvenir stores on the fingers of one hand ;))).

However, this is not the end of sheepishness. Only the Faroese could have come up with the idea to measure a unit of area with sheep. More precisely, it's not a fixed value, but what area is able to feed 32 sheep! For the sake of formality, the name of this measure is mørk.

While we have written about the Azores that they are not for everyone, the Faroe Islands are an even more specific destination. Who will be fulfilled here? Definitely walkers. This is a country for active people, who are not afraid to walk a few or a dozen kilometers to see spectacular cliffs, cliffs or waterfalls. What's more, they are not afraid to go often in the rain, mud, herding a bunch of sheep and crossing fences on ladders.

Add to this the trails, which are not there, because you will not find any signage on the route, but only a lightly trodden path (and that too with favorable winds). Well, so maybe now it is clearer what I mean 😉

Of course, there are quite a few places to which you only need to walk a piece, many can be reached by car, but what fun to stop only at viewpoints? 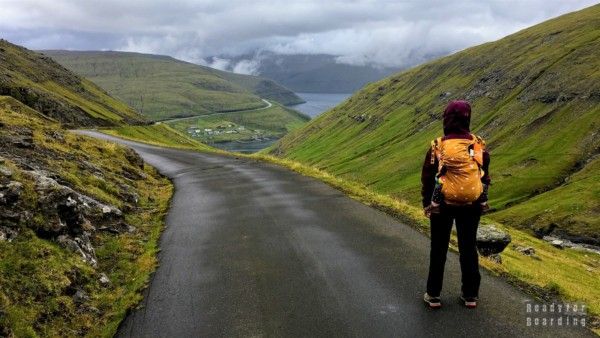 There is also no denying that the Faroe Islands are expensive. If you already come here, you have to reckon with big prices for accommodation (especially in high season) and car rental (we advise against getting around by bus). You have to pay a lot for food (especially dining out), but the basic products in the stores are not cosmically expensive.

And we by no means want to discourage you 🙂 Just flying to Føroyar you need to be aware of these "inconveniences" or "hindrances".

Weather in the Faroe Islands

Of course, this is also not a place where sun and beach lovers come 😉 The temperature in August is constant: approx. 12-14 degrees, but we have to admit that when the sun appears the perceptible can be much higher. It is said that in the archipelago 400 days a year it rains. Well, no 😉 A rainy day is considered a day on which at least some rain has fallen, so don't cross out your chances of sunshine.

The weather here changes like in a kaleidoscope and it is difficult to predict what weather awaits us behind the tunnel or on another island (fortunately, live cameras come to our aid). We were very lucky – we ended up with excellent weather for several days (yes, on the other hand there were a few rainy and cloudy ones, but we are optimists who see the glass half full). 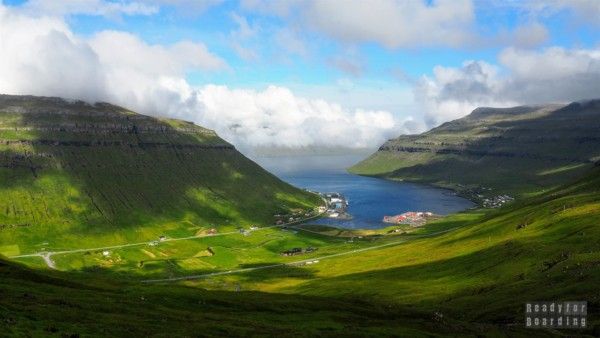 How to get to the Faroe Islands?

The easiest way to get to the archipelago is by plane, but there are also ferries (they go from Denmark to Iceland, so you can combine our trip with Iceland as well).

We chose the faster option with the plane. The only airport in the Faroe Islands has several planes a day and two airlines: SAS and farers Atlantic Airways. We flew SAS airline from Warsaw to Copenhagen, and from there to Vágar airport (named exactly the same as the whole island).

The flight from Warsaw took about an hour, and to the Faroe Islands about two hours. Once again, the worst thing about the whole trip turned out to be the long transfer, because the flights themselves were very comfortable and efficient. The ticket for one person cost us PLN 1,600 (without any promotions).

Vágar airport It is considered a dangerous airport, especially due to unfavorable winds. We have read that it is the weather conditions that make several approaches, but fortunately we did not have the opportunity to find out for ourselves. Instead, we had the opportunity to enjoy the beautiful views from behind the windows of the plane, because as ordered, the weather was excellent (we saw m.In. Lake Sørvágsvatn). 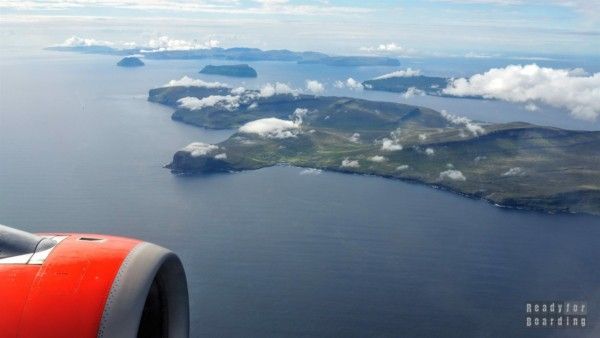 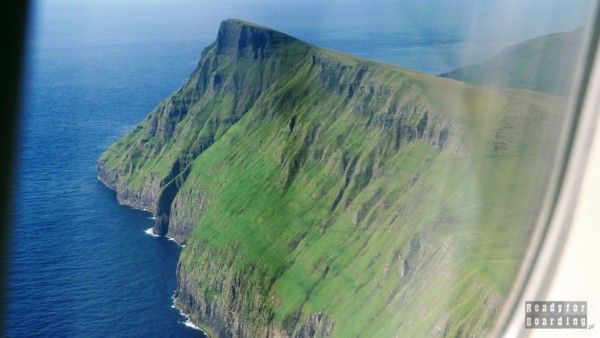 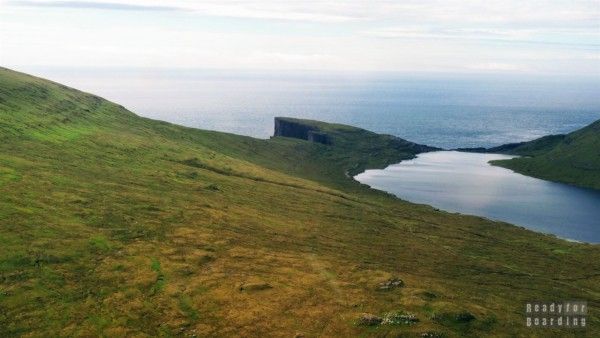 Although, by the way, the Madeira airport impressed us more in terms of the difficulty of landing 😉

The Faroe Islands airport is tiny and the control tower is miniature – but that's more than enough to handle nearly 300,000 passengers a year (2016 figures. [source] ). Interestingly, despite the fact that the archipelago is not part of the Schengen zone, no one checked passports on departure and arrival (except for baggage claim). 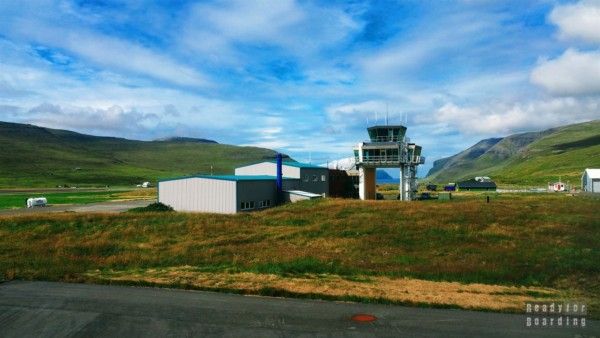 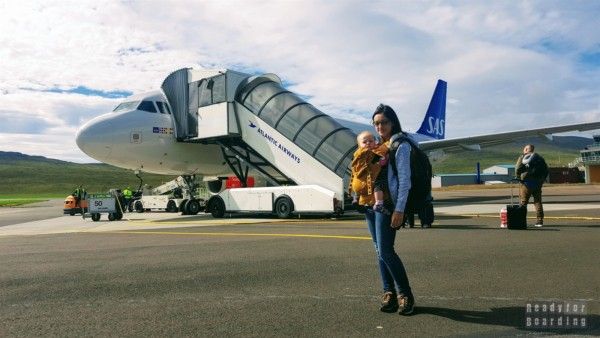 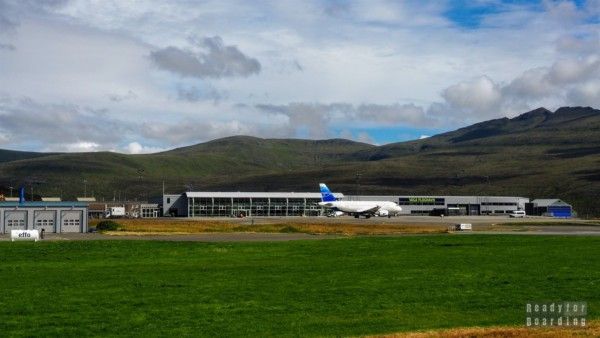 Aha, being at the airport, pay attention to the store located here – souvenirs are cheaper than in other places in the Islands, you can also safely buy drinks (including alcoholic) because their prices are attractive.

After landing, it was left to us to pick up the car and go on our way. Unfortunately, the problem arose at the first point. Well, we could not locate our car rental anywhere. There was only one window, but it did not serve the company from which we had confirmation. We went out and sought help from an airport employee, who surprisingly had heard nothing about the company. Then we started to get a little stressed.

We realized that renting a car outright might border on a miracle, and if we succeeded, it would cost us as much as five flights to the Faroe Islands. Fortunately, the airport employee, an elderly, kind-hearted gentleman, got very involved and started calling his contacts. It turned out that the rental company does exist (ufff), and the keys are waiting for us at the Tourist Information, which we passed by because there were several people waiting there. Those few people in the queue were nothing compared to the queue for other rentals, so all in all we came out more favorably 🙂 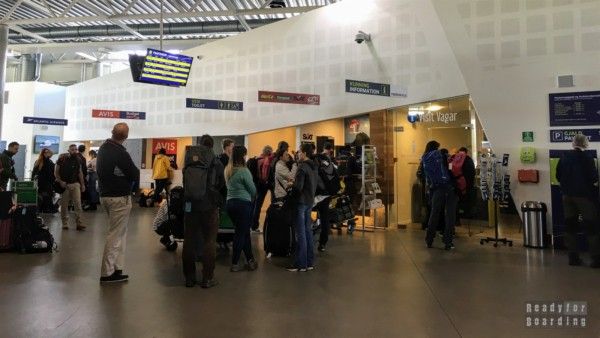 By the way, we highly recommend our rental shop to you. This is a typically local rental company (exceptionally we didn't book through Rentalcars this time), it simply calls itself make.fo 🙂 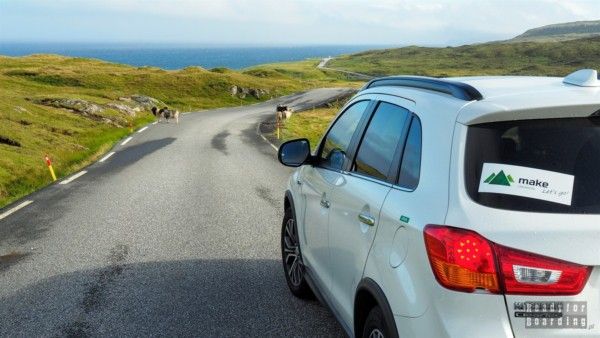 Once we picked up the car it was left to us to fasten our seatbelts, hit the road and watch out for those hairy creatures just waiting to jump under the oncoming car.