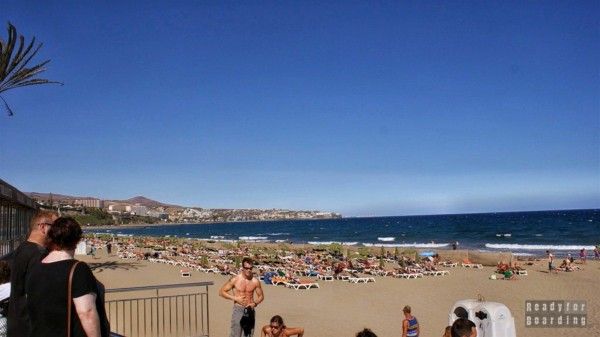 We decided to make the most of our stay in the Canary Islands according to the principle: We do not know if we will ever come back here again (And we were not limited to Tenerife.

At least we can say that we were "in the Canary Islands" and not just "in Tenerife" 😉 We saw two other islands, the first of which was Gran Canaria – The third largest island in the archipelago, but the population living here is half of the population of the entire Canary Islands (half of which live in the capital – Las Palmas GC).

Travel between the islands

There are two ways to get to Gran Canaria: by ferry or by plane. Price similar and the difference in the duration of the trip – colossal! So we chose the airline's plane Binter (The same airline we flew from Fuerteventura to Tenerife). These are Spanish airlines, which are traveled by rather local residents – we were probably the only foreigners (and as foreigners we paid correspondingly more for the ticket itself).

Our flight to Gran Canaria was at 8 am from Santa Cruz, so we were at the airport a few minutes after 7.00 (we were the first to enter the terminal – it has just been open since 7.00!). 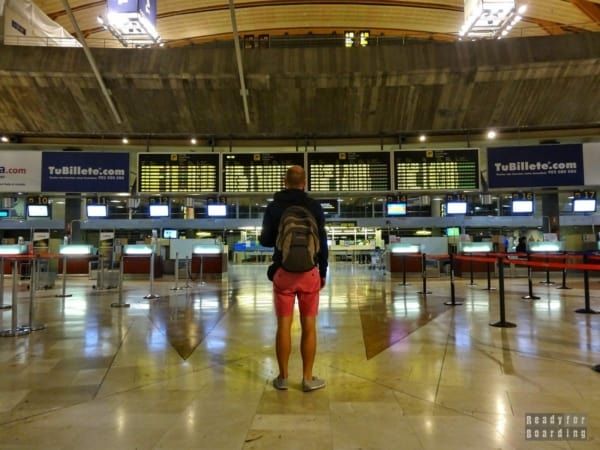 We were able to leave the car in the parking spaces of the car rental company – a good patent if you rented a car at the airport 😉 We flew on a small plane, but the trip was quite comfortable. We even got water, some snacks. The whole flight lasted slightly more than half an hour, so the stewardesses rushed everything as much as they could – they barely handed out cookies and already had to clean up and prepare for landing. 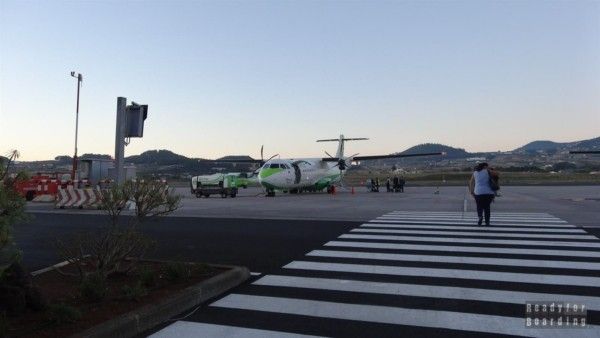 We landed at 8.40 at the airport below Las Palmas, Where a man from a car rental company was waiting for us and gave us a small shuttle bus ride to the car. If you have little time it is worth renting a car even for one day. The cost is not much, and you can really see a lot more.

Once we picked up the car we drove to the capital – Las Palmas de Gran Canaria. It was Sunday morning, emptiness on the streets. We managed to park on one of the side streets near the old town. We went towards the most important point – Catedral de Santa Ana, whose construction began in the 15th century and lasted as long as 350 years. 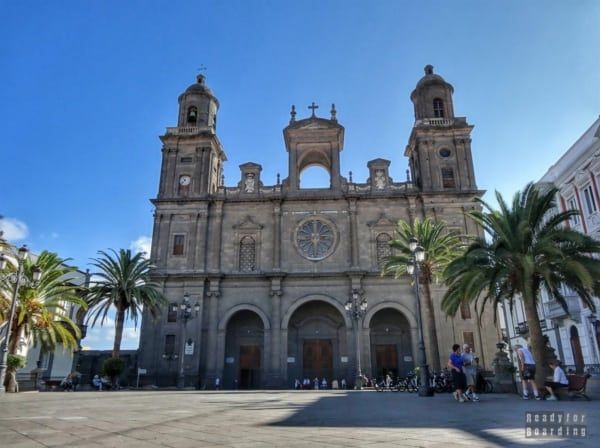 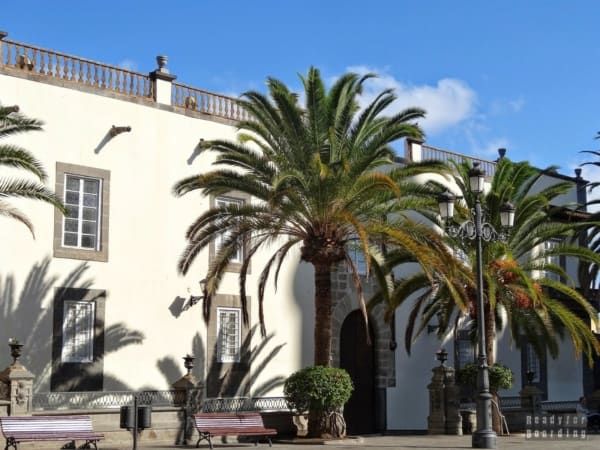 Right next door is the recommended museum Casa-Museo de Colon. Contrary to what is written in the guidebooks, there is an entrance fee. Inside, there is a large exhibit on the period Great Geographic Discoveries With Columbus' voyage to America at the forefront. It is to Columbus that much of the exhibitions are dedicated (m.in. A reconstruction of his cabin, travel logs, etc.). Two parrots live in the museum, which for some is the biggest attraction 😉

If you have time it's worth a look here, but if you only have one day it might be a waste of time to visit this museum.

We walked around the old town some more (stalls of all kinds of goods were also spread out there). 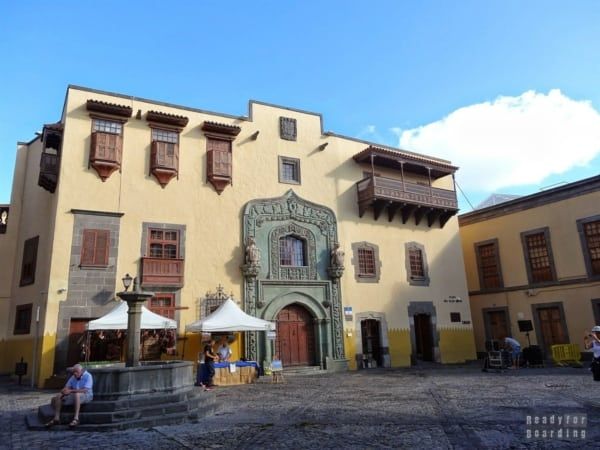 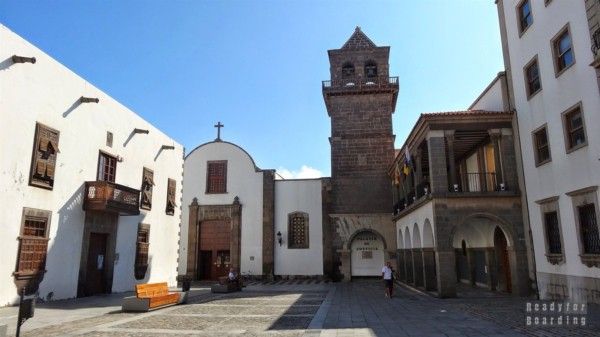 We returned to the car from where we went to the beach Playa de las Canteras – 3 km of bright sand in the island's capital. It takes a great deal of luck and patience to find a place to park in the area – we lacked both two and eventually parked in a paid parking lot nearby. The beach is really nice, large, a promenade runs along it, there are quite a few stores in the immediate area. 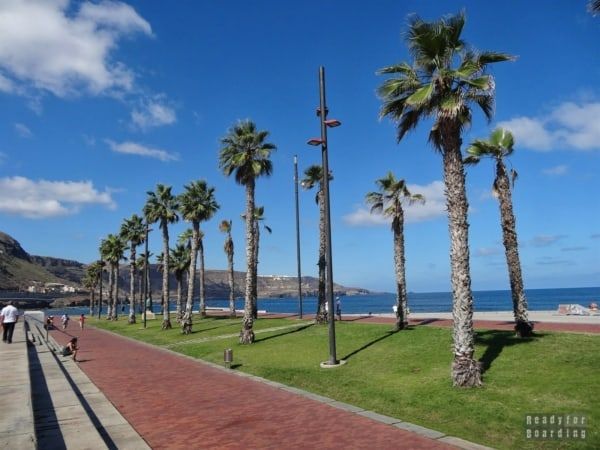 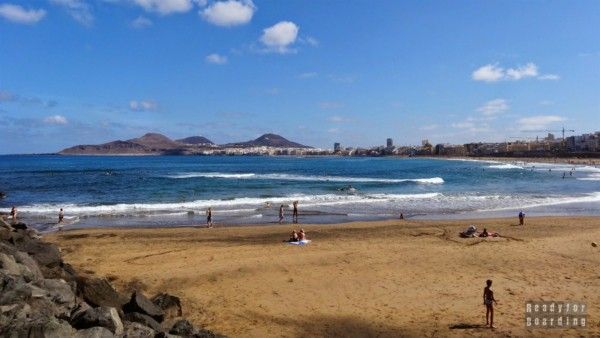 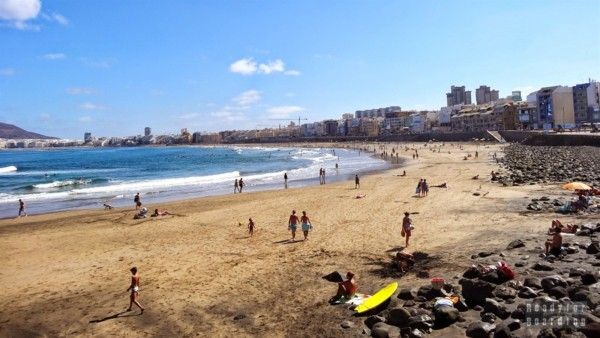 At the end there is even a shopping center with Carrefour and Primark (already the second one in the Canaries!), but both stores were closed (Sunday, after all…). A short rest on the beach and we set off in the direction recommended by several (even met along the way) people – Agaete.

Distances between towns are not great, and also the roads are quite good so the trip itself took us about 20 minutes. Already at the entrance to Agaete We saw a lot of cars parked on the side of the road. The parking business is booming, for 2 euros you can easily find a space in one of the private parking lots. We went first to the promenade and walked along it for a while to the "port". The weather was great! Thanks to the very good visibility, we could even see Tenerife with the towering Teide volcano! 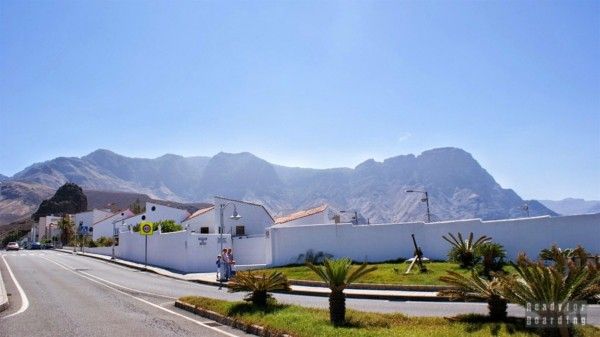 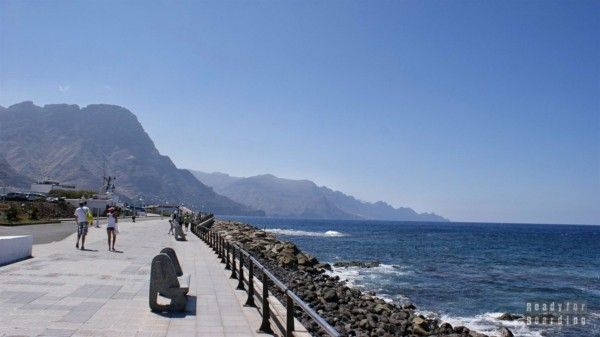 Along the way there is plenty of exercise equipment, so if someone suddenly got the urge he can exercise on an orbitrek. The town and the views are wonderful! It reminds a bit of cities from the Greek islands with its white and blue colors, but also Canarian wooden balconies. 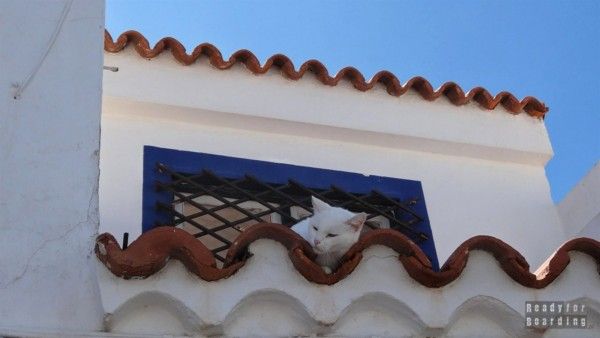 There is also a small beach and plenty of restaurants (serving not only seafood but fast food, of course). It is worth walking through some streets, the promenade and approach to the Iglesia de Nuestra Senora de la Concepcion. Interestingly, driving to Agaete there are plenty of signposts to the Dedo de Dios (Finger of God), but it is in vain to look for this rock – it was destroyed in 2005, but if one wishes one can see the place where it was located. 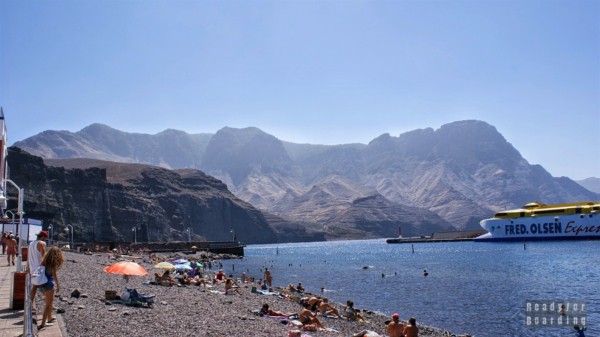 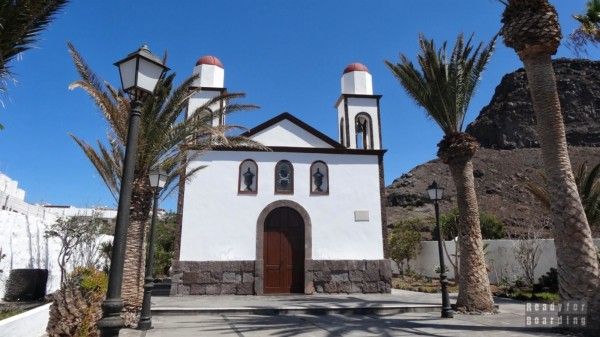 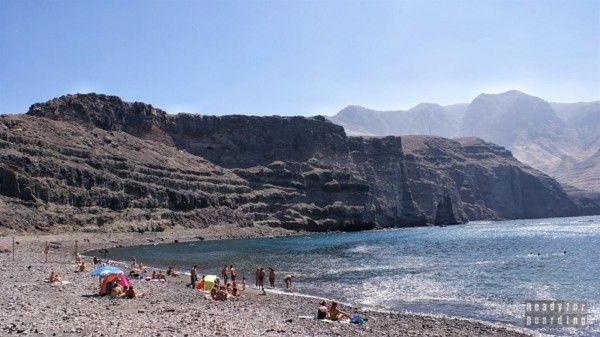 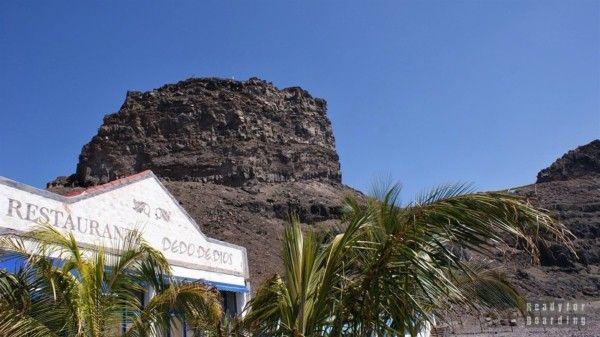 Then we went back to the town of Arucas Nearby Las Palmas. There is a huge Neo-Gothic church here Iglesia de San Juan – reminiscent of Barcelona's Sagrada Familia. 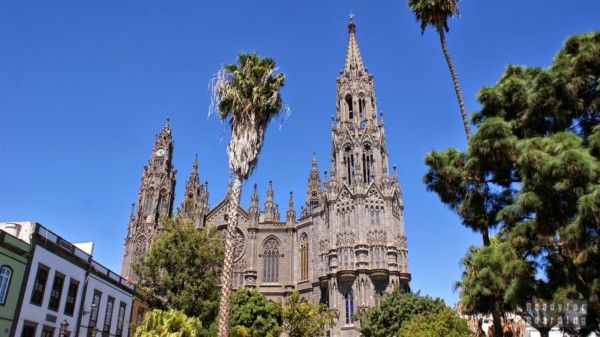 There are plenty of narrow streets to walk through. 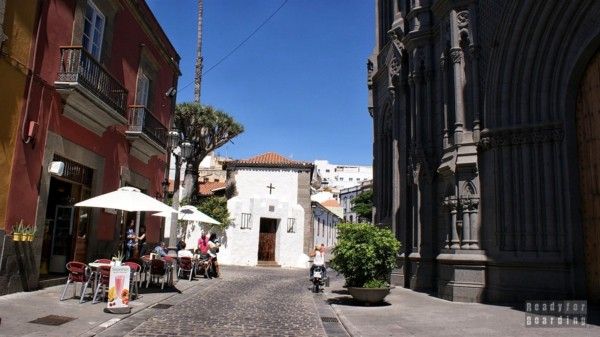 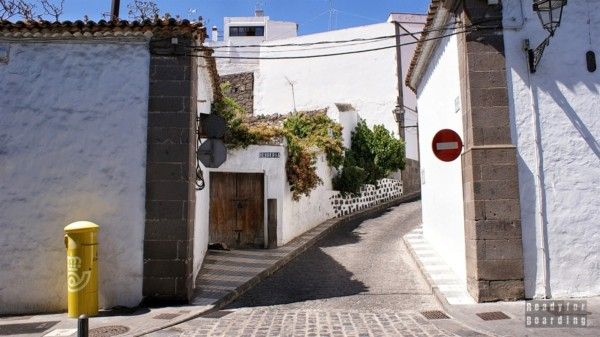 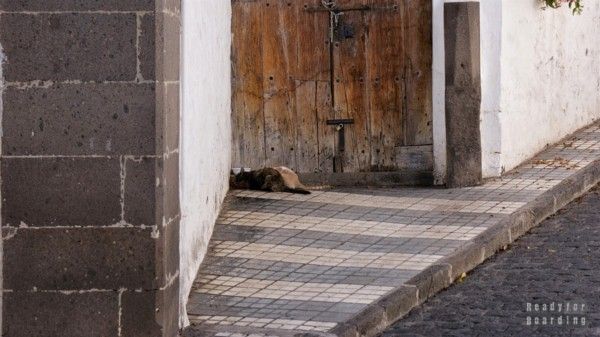 As it was well past noon we decided to eat something in a pub recommended by Lonely Planet Tasca Jamon with a piglet in the logo. The food may not have been stunning in appearance but it was quite tasty 🙂 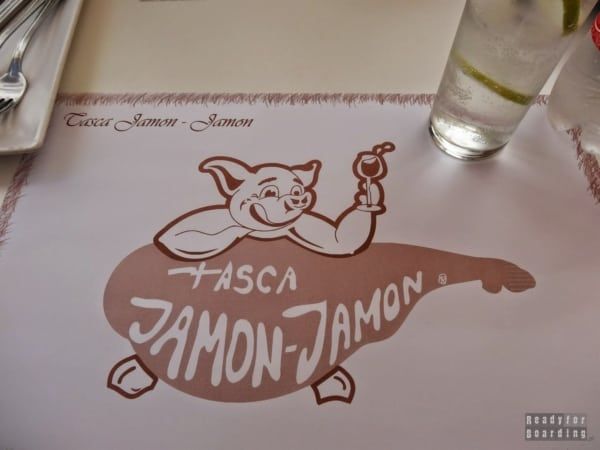 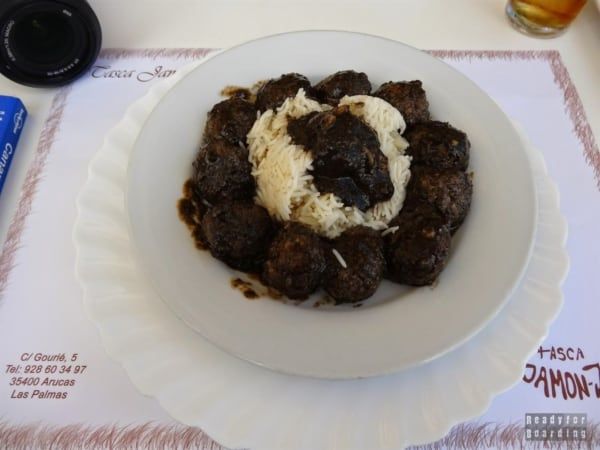 Queen of the beaches?

After a short rest, we headed further south – to Maspalomas z Playa del Ingles in the lead. Comparing Arucas and Maspalomas, you might think you are landing on a completely different island. From everywhere we were struck by the numerous hotels, shopping malls, restaurants, markets – we ended up in the mecca of tourism in Gran Canaria. The atmosphere of this village is best illustrated by the following photos – they were taken in one square. Wherever we don't look we have eateries: a Chinese buffet, an Italian restaurant, a German beer, an ice cream parlor and, note, there is a Spanish accent: Paella 🙂 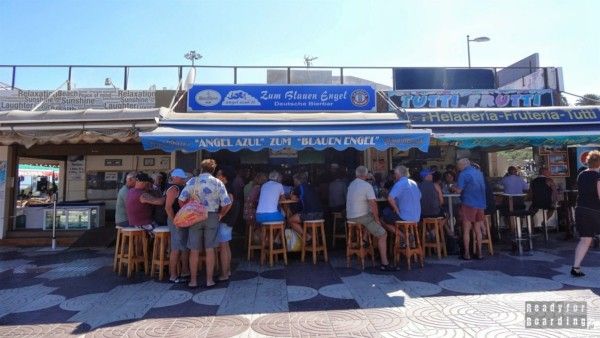 Still taking advantage of the sun, we spread out on the beach, but the conditions were not very favorable – a strong wind made it take us as long to clean our equipment and clothes from the sand as it did to lie in the sun. We packed up and headed towards the airport to return the car and catch the plane without any problems. 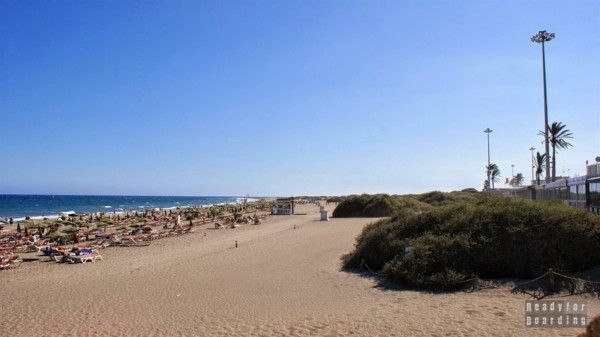 The beach itself and the dunes did not impress us much. The fact the terrain is huge, the beach is long and the dunes are huge … but somehow for us I think Tenerife wins though 🙂

It was a very intense day. With a rental car, we were able to see a lot of places both north and south. Two beaches, four cities, more than 300 km on the car counter and another few hundred on the plane counter, and all from 6 to 22 🙂 Maybe for some it's short. In our hearts, however, Tenerife wins! But we'll write more about that…