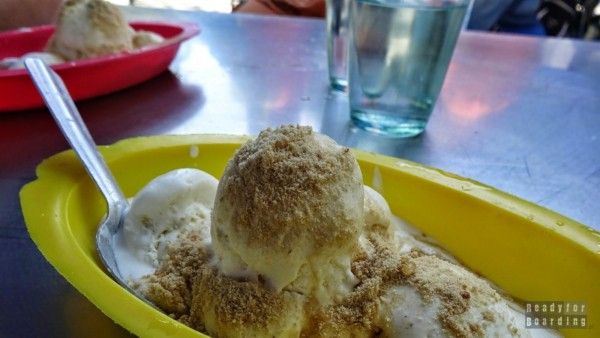 Cuban cuisine, or how to make a pretty tasty meal out of nothing

Cubans have achieved mastery when it comes to preparing meals from basic products available to them.

Allergies or vegetarians do not have an easy life here, and once you find a store with full shelves, they look at you like you're crazy for wanting to read the composition of products. As it is, you have to take it, and not be picky that it is not eco, fatty, that it has gluten, lactose, sugar 😉

How and what to eat in Cuba? (breakfasts, lunches, dinners…)

What we ate in Cuba? Well, contrary to appearances, we did not die of hunger. Tourists here are treated better than family members, and even more so when you pay with strong currency – you can then go to a real restaurant and hulaj dusza, order to your heart's content (the choice is greater than in Poland!).

We had breakfast provided as part of each night's stay, and sometimes we also took dinner from our hosts. For breakfast there was always a lavishly set table waiting for us: bread (forget dark, whole grain or god forbid gluten-free bread!), tomato, cucumber, mortadella, scrambled eggs or omelet and the hit was fruit and fresh juices of pineapple, mango and guava. 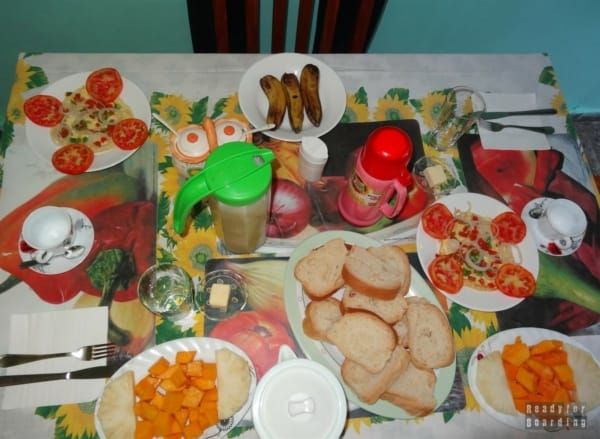 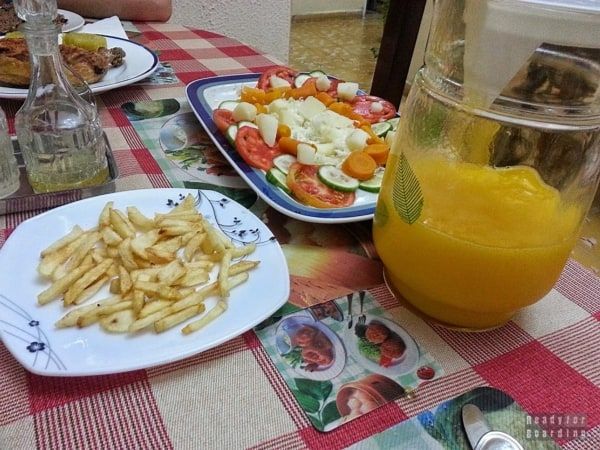 Everything was beautifully served, on porcelain plates, plus coffee, tea and powdered milk in plastic thermoses 🙂 Sometimes, we also got fried bananas, cocoa and other rarities.

Breakfasts were very plentiful and lasted a long time. Noteworthy is the fact that a separate table was prepared for guests, special tableware and there was no way to eat with the hosts. Sometimes we were specially prepared breakfast on the terrace (e.g. in Trinidad). 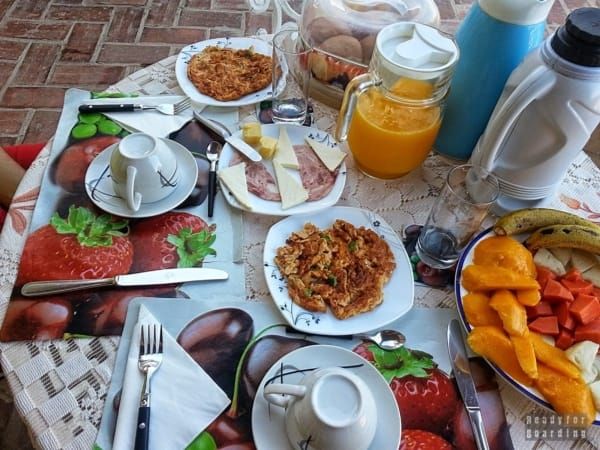 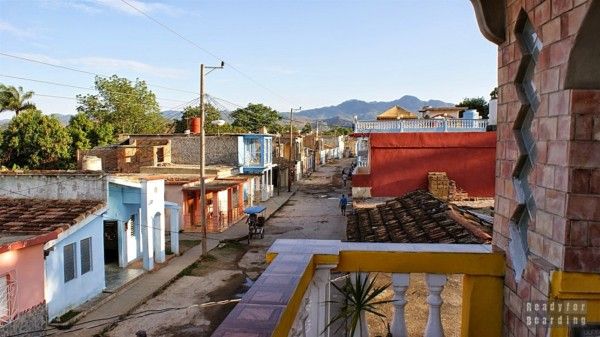 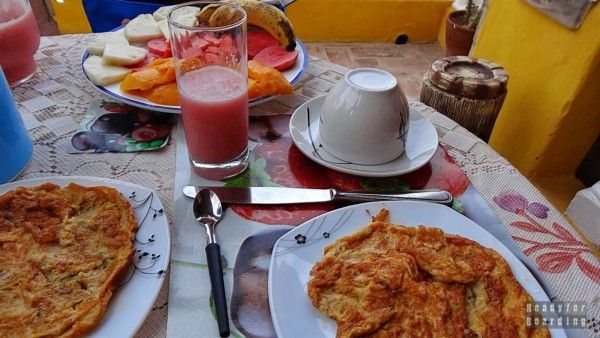 Also, dinners were often eaten in the casas where we stayed overnight. As a rule, the choices were meat (chicken, beef), fish or a rarity in the form of lobster (lobster). 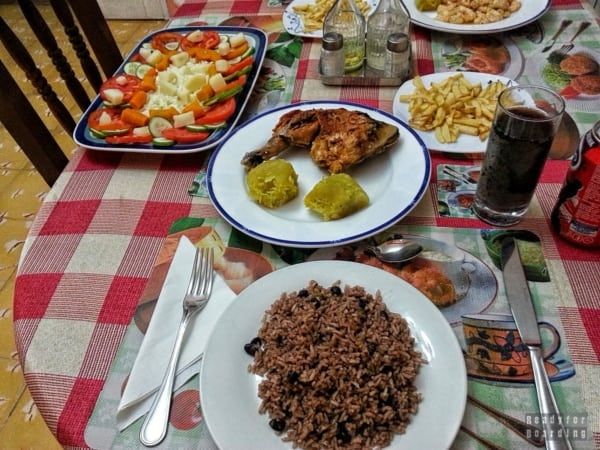 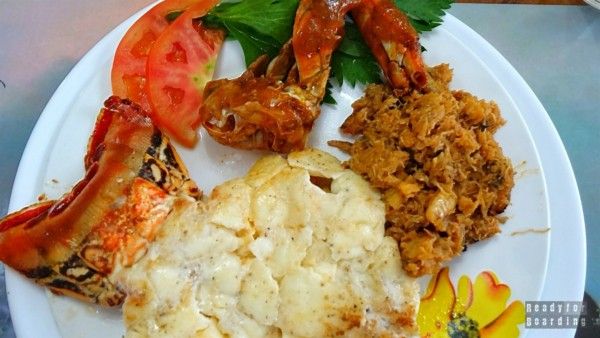 With the last one there was sometimes a problem, because Cubans are not allowed to eat it, and if they have it at home it is only for tourists. Once the hosts refused to prepare lobster for us, because apparently they were afraid to have it at all… Fortunately, we managed to taste it twice and both were really delicious (although prepared and served in two completely different ways). 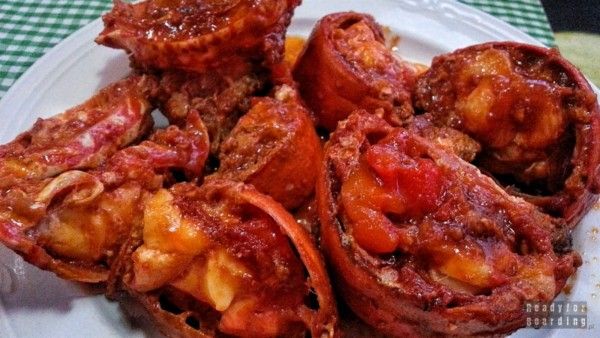 In addition to lobster, we also ordered local fish and meats – we chose the type, and the hosts took care of the rest and we always sat down to a lavishly set table, which, in addition to the main course, included: soup (e.g. with black beans or seafood), rice, mashed potatoes of every conceivable kind, lots of vegetables and traditional ice cream for dessert. 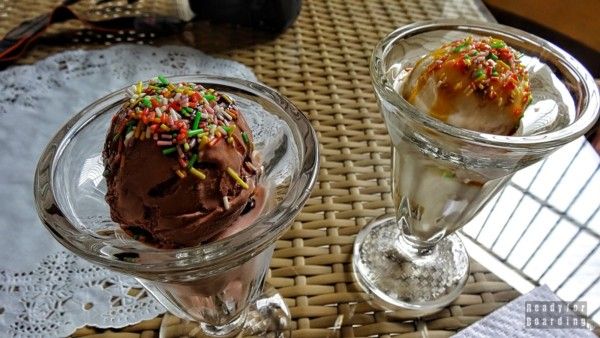 We also happened to eat dinner in restaurants – in some the choice brings you back to dizziness (from Chinese, Indian, European to American cuisine and that in one pub) and you can see a significant predominance of foreign dishes. 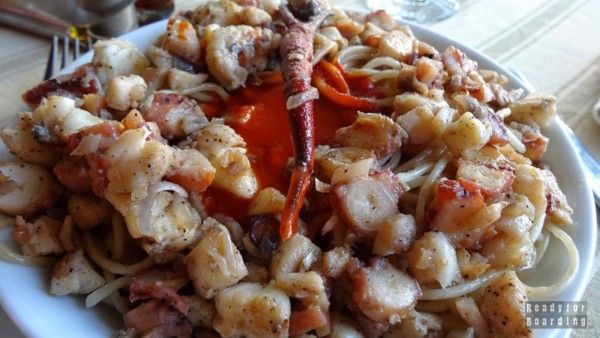 Many of them have Caribbean touches: especially using fruits (e.g. pineapple stuffed with chicken). The choice is really huge, in some restaurants there were more than 100 items, so the first thought that comes to mind is whether everything is fresh 😉 Here everyone will find something for themselves, including vegetarians. 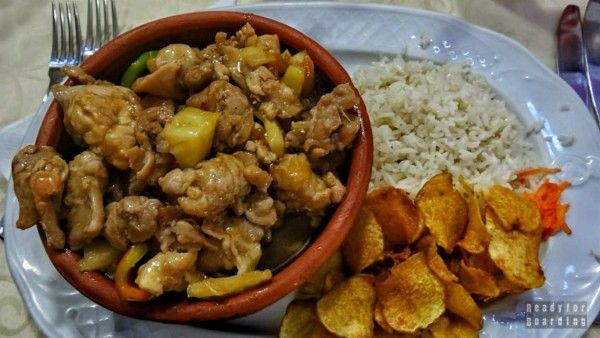 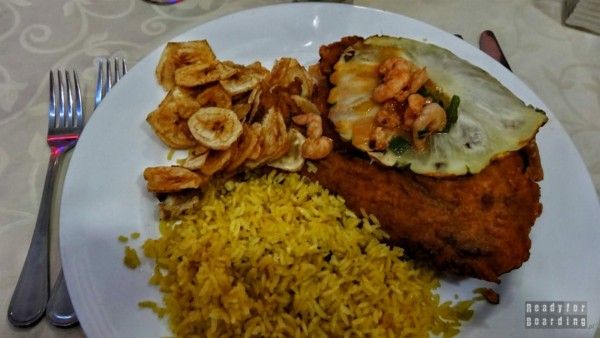 The restaurants are eaten by either tourists or wealthy Cubans, well, because how can you spend 10 CUC on one dish here? Unless they're celebrating – on one visit to a restaurant, Spanish "hundred years" were sung and played twice at different tables. 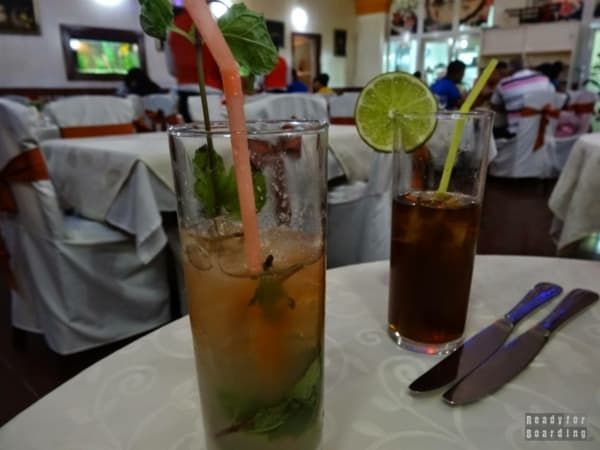 If you're looking for a restaurant, it's best to ask the people you're staying with for some recommended eateries (we ended up at some really tasty places this way, which we would have normally avoided).

Eating out? Eating from the window?

When it comes to eating out, there are several options: either we eat like tourists or like locals 🙂 Restaurants, hotels, ice cream stores, grocery stores are open to tourists.

As I wrote above, if you have strong currency and spend the night in a hotel, the day starts with a decent breakfast, around lunch time dinner in one of the nearby restaurants, where you can choose at will, with ice cream on the way (no queue!).

On the other hand, when it comes to how Cubans eat, it's not so cheerful. First of all, dishes are ordered in the so-called. Windows – people in their own homes prepare meals and sell them from the windows of their own apartments.

How to know such a place? There should be a price list, a counter, a drink machine, some sweets on display – depends on the location. It can be troublesome to discern the prices, as both the $ sign appears next to CUP and CUC, but we never paid at any window in CUC. 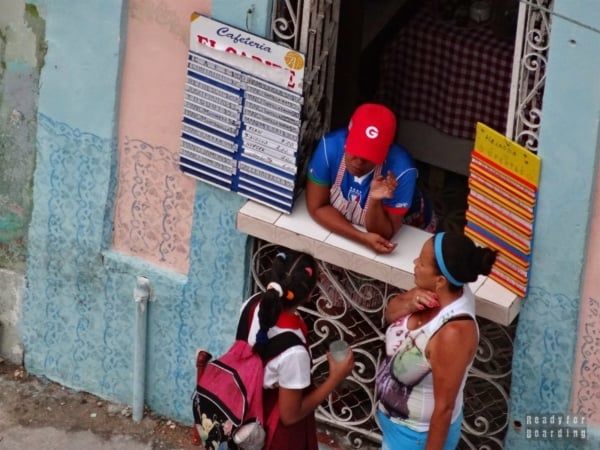 Maybe we're lucky, but we ended up with very honest vendors (or so they fear control), they never even wanted to keep the change. When we already wanted to get rid of CUP at all costs, instead of stopping the cashier pressed us with a lot of other things.

Back to the windows: it is a very cheap form of food (e.g. Fresh fruit juice £1, sandwich £2), but we have to remember that the choice is very limited. Nevertheless, Cubans are surprised at how many ways you can sell a roll: with mayonnaise, with mortadella, with fried or boiled egg, with sausage, with fruit, etc. 🙂 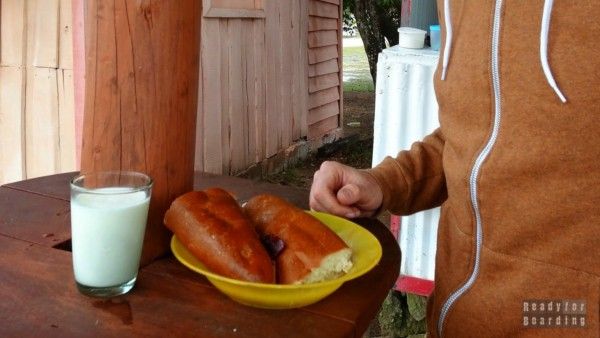 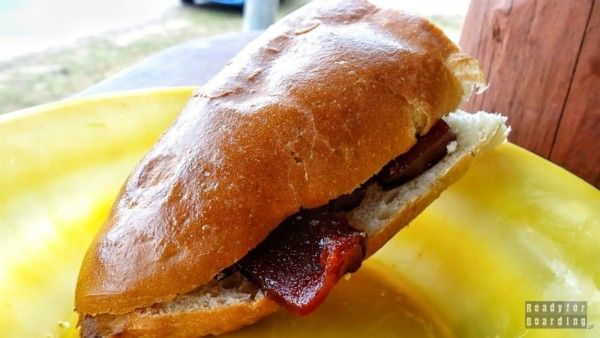 It was fun for us at first, but after a few times we started to get bored with the same flavors. Knowing Spanish also comes in handy, as you can't count on the lady at the window to speak English, so be sure to remember the numbers and food.

In addition to sandwiches, in the windows you can also eat pizza, burger, hot dog. Simple in its simplicity, but you can try it 🙂 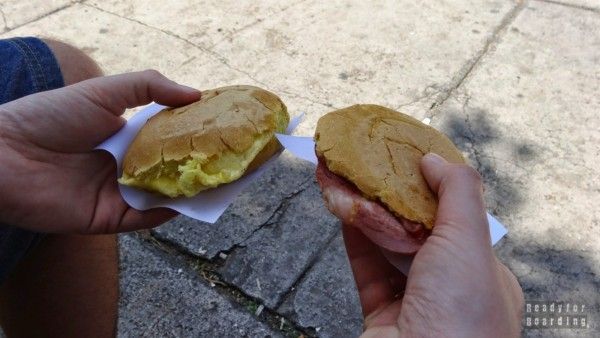 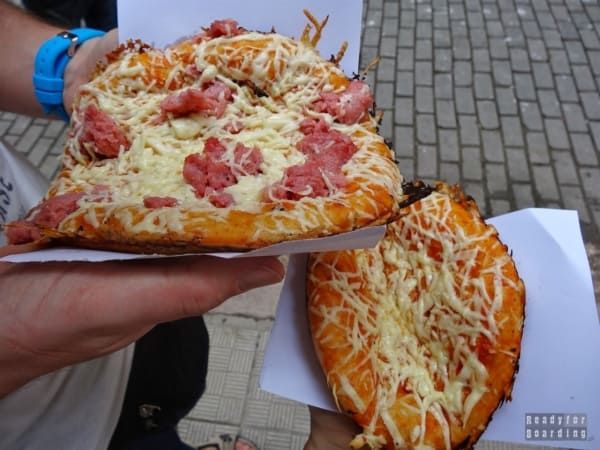 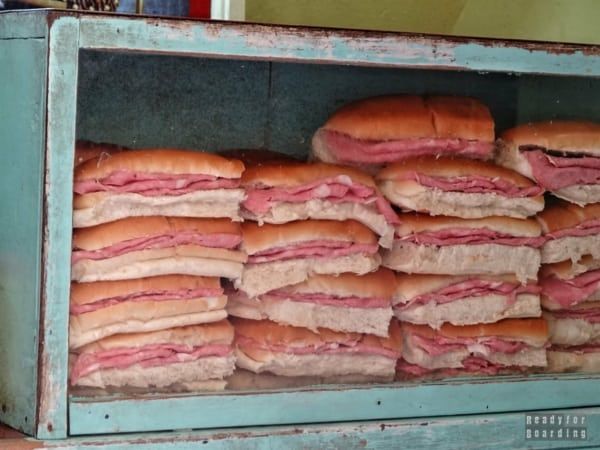 What struck us was the huge amounts of salt – not only is the pizza very salty, but Cubans the first thing they do after receiving it is add salt! The food is also greasy, and a hamburger means exactly a bun with meat, not some lettuce, tomato or extra sauces.

It's a very cheap way to eat, but unfortunately not in the long run – we missed the side dishes, vegetables and increasingly appreciated what we have in Poland every day. We calculated that for 10 zl a day we would have food for the whole day: sandwiches for breakfast, pizza for lunch, a sandwich for dinner plus some fruit, ice cream.

And while we're on the subject of fruit and ice cream 🙂 This is the best thing about Cuba – fresh, healthy, unsprayed fruit (pesticides are too expensive, so they don't use them). Often straight from the tree, they cost pennies, and the hosts sometimes gifted us with a bag of mangoes, bananas or guava for the road. 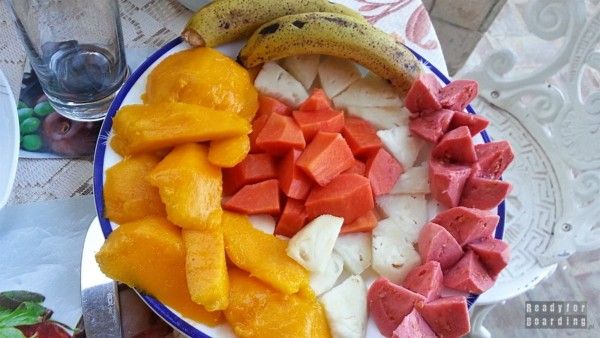 We always had them on hand, and they taste completely different from what we have here. We also often bought fresh fruit juices, whether in restaurants or at windows. Delicious! After returning to Poland, we realized that these fruits available here are not the same…

And the ice cream? Ice cream will already be inextricably associated with Cuba. They're not delicious (we've eaten better, especially the Italian ones), but it's more about the whole environment around them. On the streets we will buy ice cream so called "ice cream". Italian from vending machines, but we recommend you to go to a typical ice cream shop, e.g. Coppelia in Havana, standing off in line to try the local ice cream. 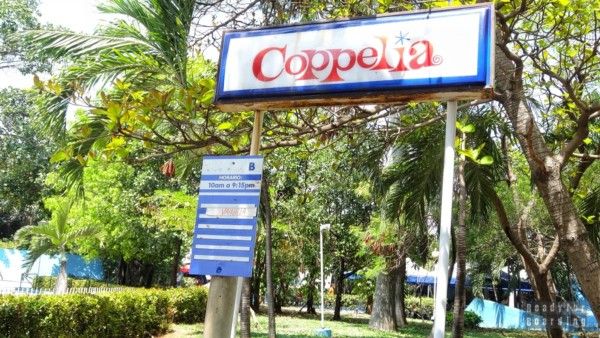 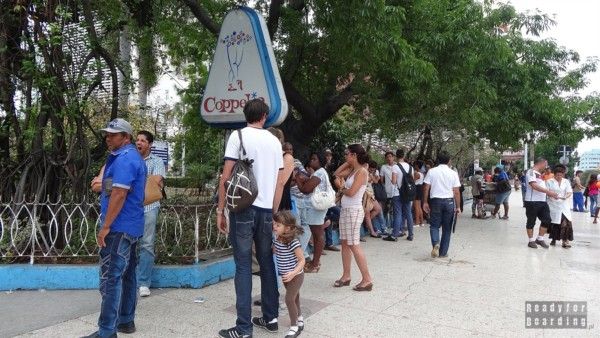 If you are lucky you will hit more than one flavor of ice cream 🙂 On the menu for this several items: 1 ball, 2 balls, 3 balls, ice cream with sprinkles, ice cream with toppings, etc. Plus they bring a glass of water for an appetizer 🙂 At first we ordered blind, but after one time we understood what is what and for how much. 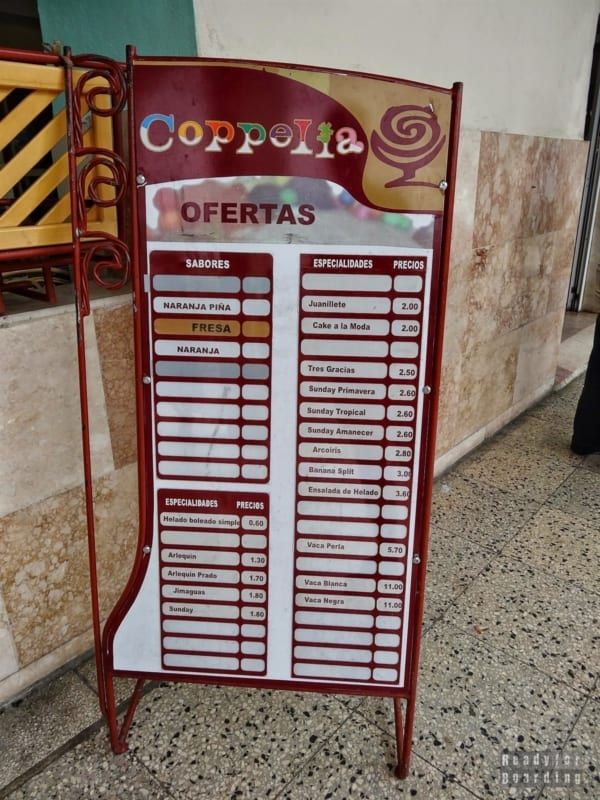 We were charmed by the plastic plates, as well as Cubans who come here with whole families and pack ice cream to take away in thermoses. We also found a similar ice cream shop in Cienfuegos, but already without queues and with a larger selection of desserts (e.g. with fruit). For a cup we paid probably 2 zloty. 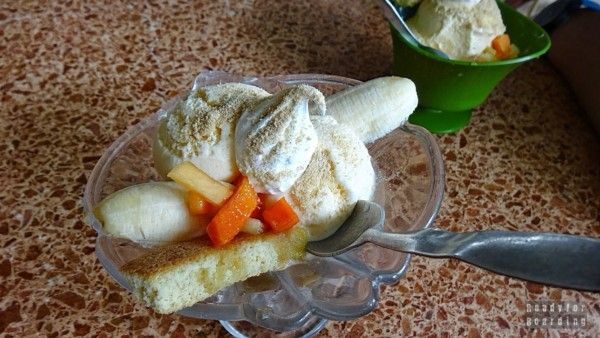 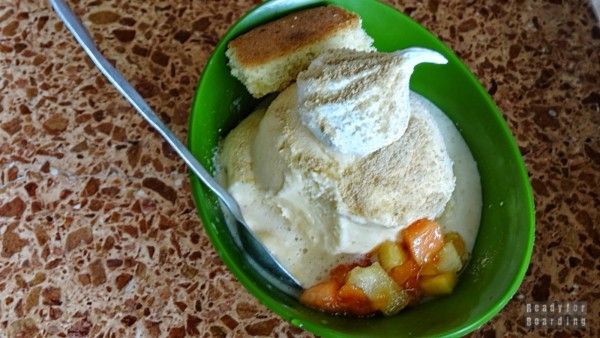 Of course, if you need more choice, a nice interior, comfortable chairs, there are also ice cream parlors on the grazing, but also the prices are then relatively higher.

I hope we brought you a little closer to the culinary Cuba 🙂 As we mentioned many times before, the country is changing and probably in a few years there will be more and more restaurants, and local bars will be scrupulously hidden from tourists. All the more encouragement: fly as soon as possible. 🙂