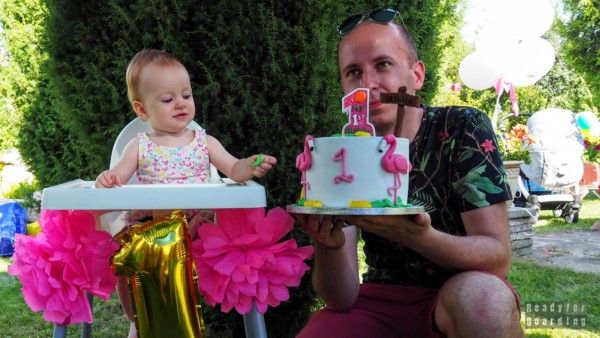 We’re celebrating our first year of traveling with the three of us, and we have a discount for you as a gift!

How is it possible that the time flies so fast? Just yesterday I remember how we cuddled this little being, weighing 3 kilograms, so vulnerable and delicate. Now there is a small, smiling happiness running in front of our eyes (almost), which is everywhere. What were these last 12 months? What we learned? What does traveling together give to a child and parents?

Olive from the beginning rushed everywhere and liked to surprise us. Even in her belly she could not last 9 months. Well, because what’s the point when there are such cool things going on out there? From the beginning, we knew that we had to expect the unexpected and be prepared for every eventuality, to say the least, did not mean that we were successful.

The first child is always a challenge – every parent wants the best, tries, reads books, gushes on the web to find the most important information, how the child should develop, how to stimulate this development, what are the healthiest cosmetics, what are the best clothes and the most developing toys, how to nurture the child, how to carry, etc., etc… Unfortunately, it is easy to fall into a trap here: the more people ask, the more opinions to look for, the more opinions and advice you can hear, and in addition, often mutually exclusive. Leaving aside the Internet and family – there will always be a few people on the street who will know better, that in the feet it is too cold for the child (at 28st.), and the wind is sure to blow the ears 😉 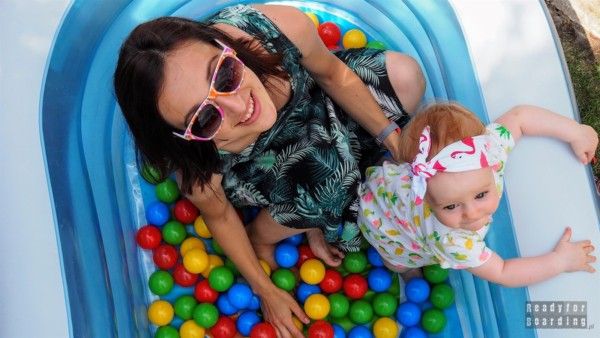 So there we were wandering. And when we managed to find the best solutions, methods that worked for us or the right cosmetics for care, it turned out that you need to look for some books… new diapers, because the favorite ones changed for the worse… and this something popped up on the face, so immediately a thousand diagnoses of different doctors… and this is about to expand the diet… and this weight loss, etc. etc. Endless stories 🙂 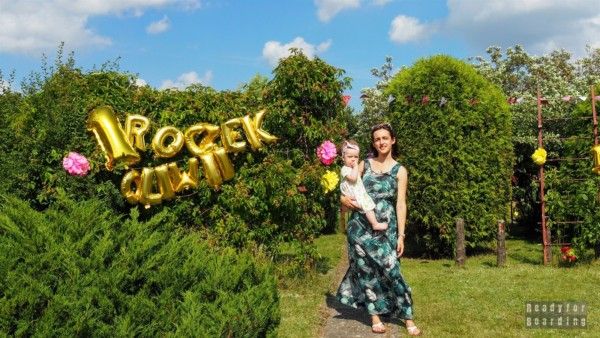 Honestly? I have learned more in this year than in any other! I know and can do things I would never have suspected myself of, I have explored lactation, infant allergies, dietary expansion, kinesiology, safe transportation of children (and adults by the way) by car, natural medicine, etc. etc. Every mom knows what I mean. Anyway, Mom is such an institution that should be a doctor, nanny, cook, waitress, assistant, chauffeur… and anyway, who would disagree with this demotion? 😉 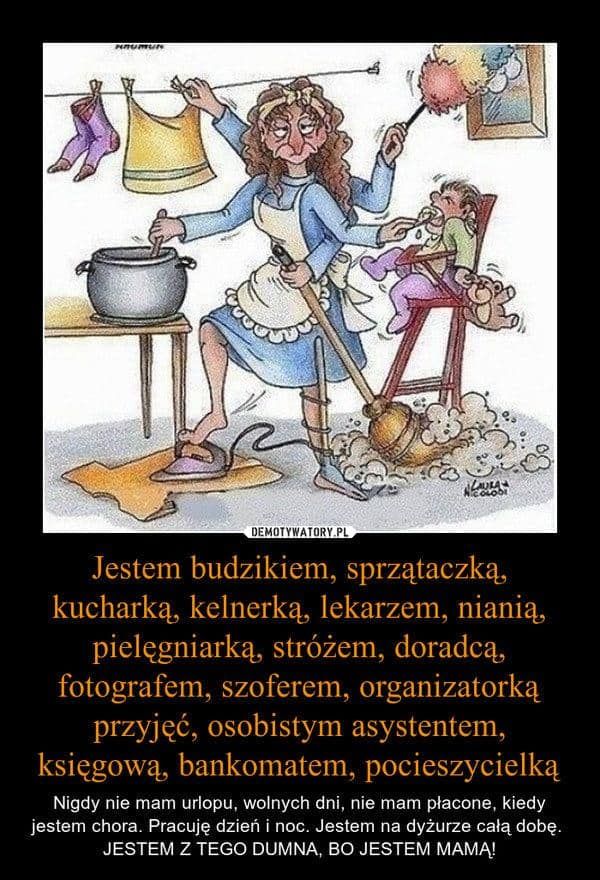 Traveling with a little toddler

When Olive was born we had no specific travel plans. We wanted to fully focus on the baby, and there will still be time for trips (or maybe because you can’t buy airline tickets without a birth date?). This does not mean that we did not want to go anywhere. As much as we were tempted, we were putting our feet up, because the time from the flight to Portugal (April/May 2016) to the flight to Sicily (January 2017) was the longest time for us without further travel in a couple of nice years. 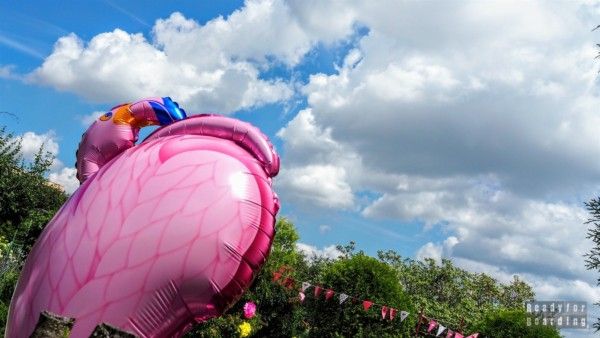 We started slowly. Initially a one-day trip near Lodz, then a few days in Lithuania, Tricity, then it was time for the first flights and more trips around Poland.

I’m not writing this to brag about where it was no longer Olive, but to show more or less at what age she traveled with us and where, because one of the most common questions on forums and groups is precisely at what age and where to fly with an infant. As you can see, we did not choose destinations typically restful (I should add that the aforementioned Sicily took place in January, when there is no chance to enter the sea and we covered several hundred kilometers a day).

What traveling with three of us gave us?

First of all, we learned that it is possible to reduce the pace of travel 😉 Until now, our plans for trips were filled to the brim, and after the vacation we returned to work even more tired (although mentally rested and with recharged batteries). This time the plan is very flexible (if you can talk about any plan). We plan from day to day depending on the moods, strength and desire of all three of us.

We started paying attention to things we used to not notice. And I don’t just mean changing tables and baby-friendly places 😉 We find time to go to the park, sit on a bench and watch nature, we go to a restaurant where we can sit for an hour, we are able to delight in a dog we meet along the way (and even talk to it!). We notice more around 🙂 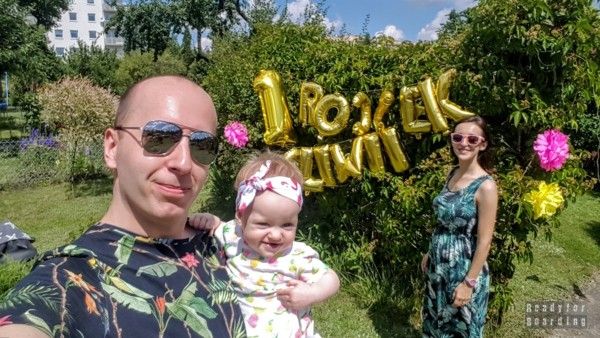 What helps us to travel?

Proximity! We are trying to practice proximity parenting, but I deliberately write “trying”, because we do not do it blindly and fully restrictively. Anyway, I treat the principles behind intimacy parenting more as guidelines or tips to help build a bond with the baby. However, I do not want to write about the idea itself, because who knows knows what it is all about, and who does not, I refer you to the books of the Sears family. However, I want to emphasize that many of these rules have helped us to travel painlessly.

Olive acclimatizes quickly. I have the impression that it doesn’t impress her at all where she is, where she sleeps, because everywhere she immediately starts exploring a new area, but…well, as long as her parents are around. With us he feels at ease, has courage, does not get upset or angry. She has no problem falling asleep in new places, because she just sleeps with us. What surprised us a lot was the quick switch to local time in China – after one night during the day she switched to a completely different time zone. By the way, it was the same after returning to Poland.

Proximity can also be practiced in a very simple way – by carrying the baby. The baby from birth wants to be close, to feel the warmth and smell of the parents (specifically, I do not write only about mom). It spent 9 months in the belly, floating and swaying during mom’s movements, so it’s no wonder that in a sling or carrier it feels calm and eager to fall asleep. 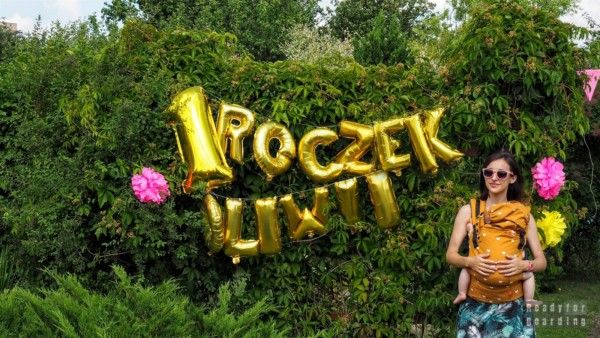 I, from the beginning, knew that I wanted to learn how to carry my baby in a sling. It seemed to me at the time a practical solution. When it came down to it, I realized that it’s not just about practicality. It’s not just that I finally have two hands free and can cook dinner (my arms are too short to stand at the pots while carrying the baby in front 😉 ). It’s about something more, much more. It’s about its own closeness, about peace and quiet, about putting her to sleep, about the smell, and even about feeding her in a sling or carrier. Babywearing has repeatedly saved us in dire situations when nothing has helped. I recommend to everyone, even those parents who do not want to go anywhere far with the baby.

Initially we carried in a sling. Until the baby starts to sit up independently (important, independently!) should not be carried in a carrier. In our case, Olive, by a throw of the belt, began to try on sitting before the flight to China, and there she fully demonstrated her abilities. 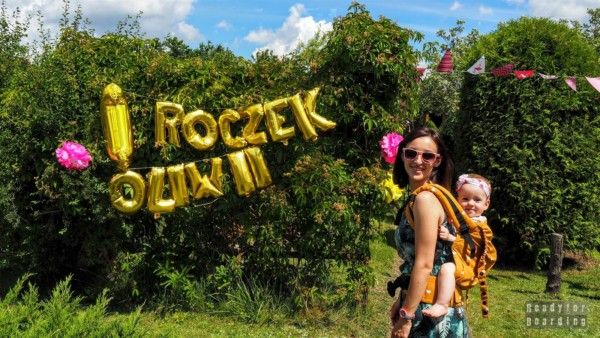 Something else? Breastfeeding! We are fortunate that we fed and continue to feed, which helps to bond with the baby, calms and makes the baby feel safe. I’m leaving aside the issues of all the gear I can’t imagine carrying with me, and I’m very impressed by how other moms are able to pack with a bottle, milk, and always manage to conjure up hot water from somewhere! Recently I witnessed a mother asking for boiling water at McDonald’s at the airport, and there without blinking an eye they poured a whole bottle 🙂

What trips give children?

You may think, why drag a child to the end of the world, that it is extreme selfishness. I have already written about the realization of my own passions and dreams, but I think that the child can also benefit from joint trips. While a two- or six-month-old toddler won’t understand anything at all, an older one is already closely observing the world and taking an interest in what’s going on around it. I won’t write about children a few years old, because I have absolutely no experience in this subject, but I will show you that even a toddler can benefit from this, and I don’t just mean long-distance escapades, but also those closer trips.

So what does such a trip give the baby? Parents! Both, available 24/7. Sounds strange? Think about it, staying at home, taking even a few days off, does it happen that you fully spend time together? As a rule, there are a thousand things to do those more or less trivial, so you separate, once mom, once dad, once grandma, once neighbor 😉 And on such a trip we are together all the time, focused on the child and his needs. Of course, you go to rest or sightseeing, but the needs of the child are in the foreground.

We noticed that after returning Olive is much more attached to her dad, whom she sees only in the mornings and evenings during the week, so it is worth looking at joint trips from this perspective as well. 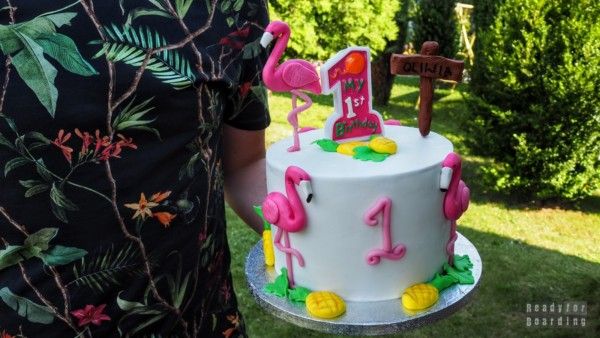 What else? We were very surprised that Olive is acquiring a lot of new skills on trips. Case in point? I don’t think so ;D And seriously, maybe it’s actually a matter of coincidence, but I talked to several moms who are not intimidated by traveling, and they confirmed the fact that often children learn many new things and skills just outside the home.

We also see what Olivia is interested in, what she pays more attention to. Children learn about the world, other cultures and are more tolerant thanks to trips. Traveling educates at any age! 🙂

The last 12 months have been special months for us, full of unknowns, requiring a lot of patience, but most of all filled to the brim with love and smiles from this little being, who makes it always merry at home or on the road.

At this point, we wish you to always be as curious about the world, joyful and enthusiastic as you were for that first year, and we will stand on our heads so that you never run out of childish imagination and dreams!

How about this gift?

We very, very much encourage you to get acquainted with the idea of proximity parenting, and not for the first time we recommend you to carry your children 🙂