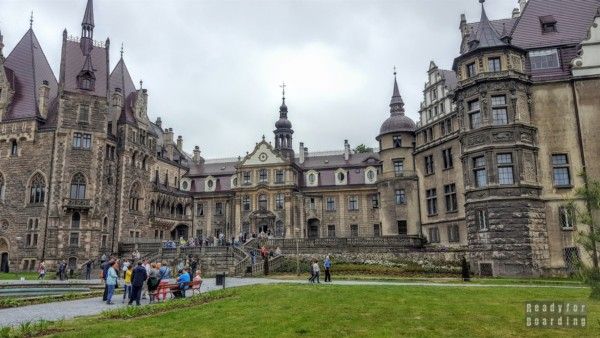 We continue exploring our beautiful Poland as part of our Ready for Poland series. After Malbork Castle, we decided that it was time to see other excellent castles. So we set off in the direction of Lower Silesia, our destination: Moszna Castle!

But before we begin our discussion of castles in Lower Silesia, let's take a look at one palace (yes! not castle!), which is admittedly located in the Opole province, but we couldn't miss it while being in the south 🙂

So, we start our tour of Lower Silesia from a place that is not counted among the region, but it is worth bouncing a little to the east 🙂

Moszna Castle (or Palace? ;-)), as it is referred to, captivated us as soon as we saw it in the ranking of Top 10 castles in Poland. The first impression looking at the photos – so Disney-like, and a lot of it is right. It was modeled on the Bavarian Neuschwanstein, and this one in turn inspired by Disney. Of course, the castle in Moszna is definitely smaller, but still impressive. 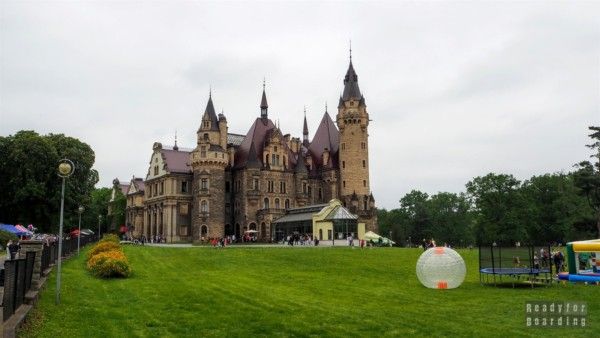 As a matter of fact, we should use the word 'palace', but somehow it has become accepted that it is a castle (although it never had a defensive function) and under this name the building is officially listed, so we will not make unnecessary confusion here and will continue to wade into this anomaly, forgive us! 😉

Due to work commitments, we could only come to the area on a weekend, a long one on top of that, so we expected crowds, queues and high prices. Fortunately, it was not so bad! We parked far from the entrance, near the stables, but this was due to the road we took here. 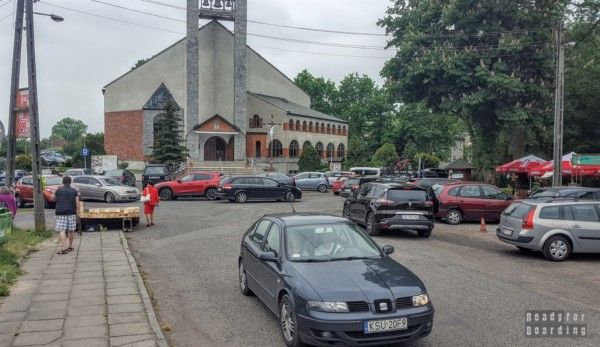 You have to walk a bit to the castle itself, and from everywhere you are attacked by stalls with all kinds of goods, waffles, ice cream, etc. By the time you get to the checkout, you can spend a fortune on Made in China plastic toys (does really every road where there are more tourists have to be swamped with these booths and stands?).

After a short walk, the castle emerges on the left, but it is also worth looking to the right, where there is a lake and m.in. Swans. A couple of photos and we move towards the entrance, but not yet the castle, but to the park surrounding the building. 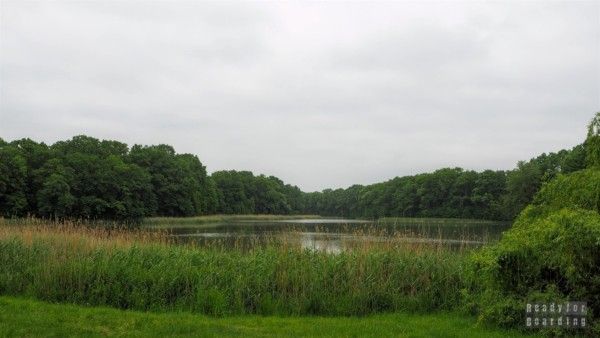 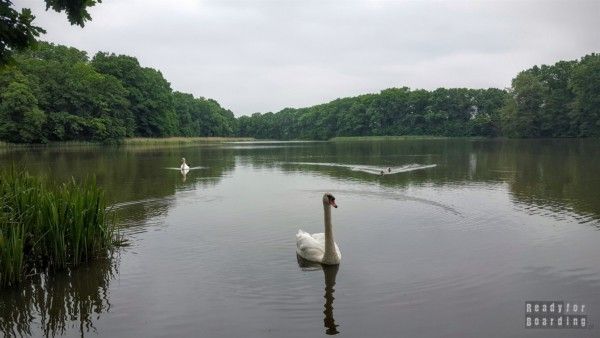 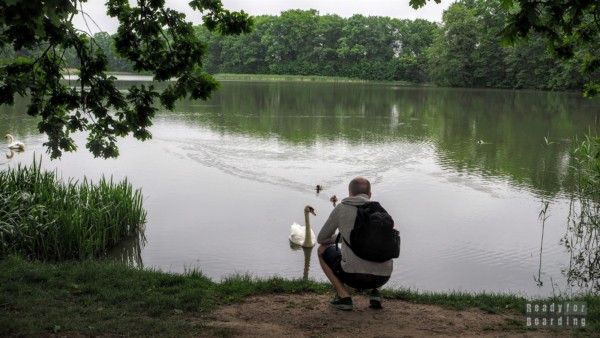 Entrance to the park area costs 6 zl, and as part of this, in addition to the park itself, we can also enter the castle, but only the first floor part including the orangery. 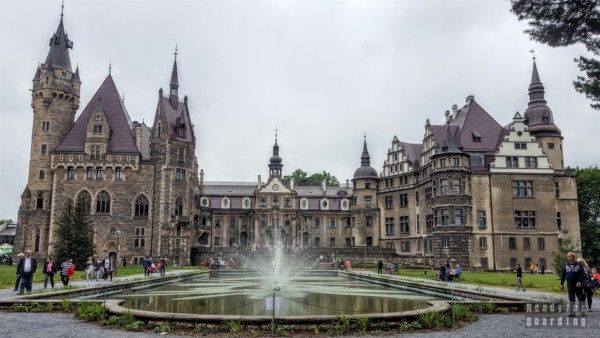 Park in the Moszna Castle

We went for a walk to start with, and left the castle for last. The grounds are quite extensive, nicely arranged, with a pond, an island and canals that run parallel along the Linden Avenue, which leads up to the castle. 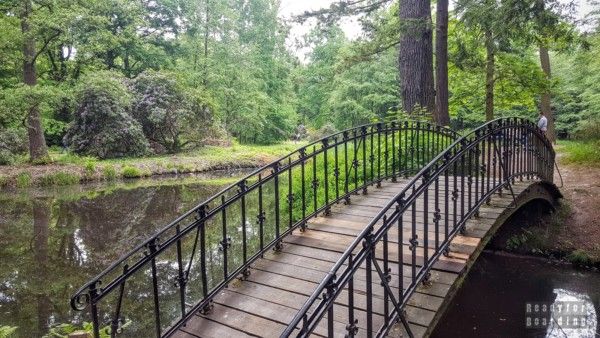 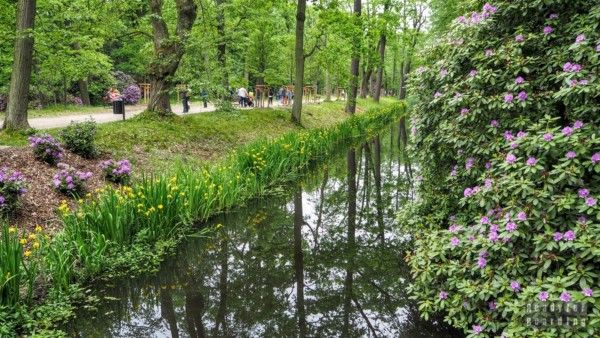 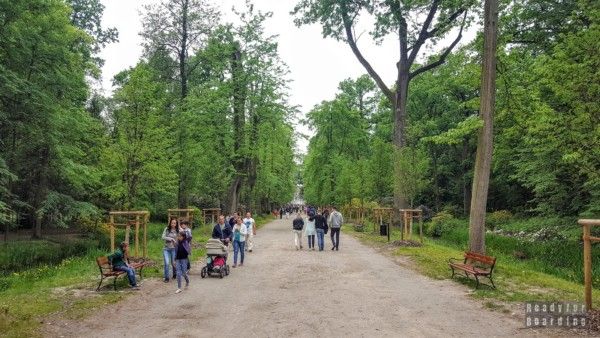 Unfortunately, our knowledge of plants is limited mainly to those that can be bought in a florist or grown on a windowsill, so we will not throw the names of all species here. However, the following deserve special attention azaleas, which bloomed beautifully in April/May. 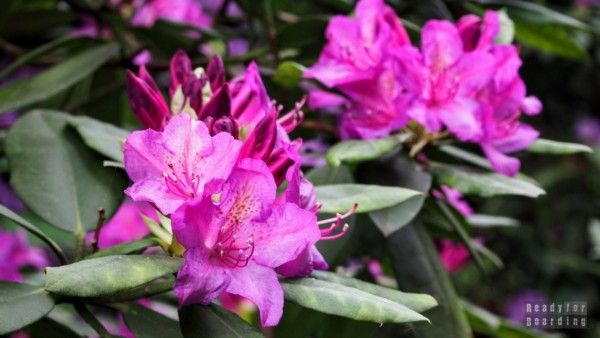 After a short walk, we reached the aforementioned avenue to the castle. From this side, the building looks its best: in the foreground, the fountain, next to it, on two sides, benches and stairs leading to the entrance. 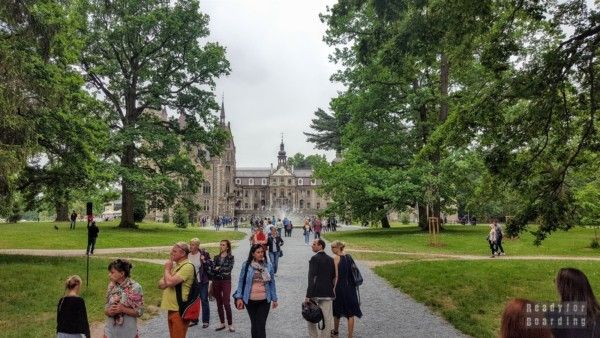 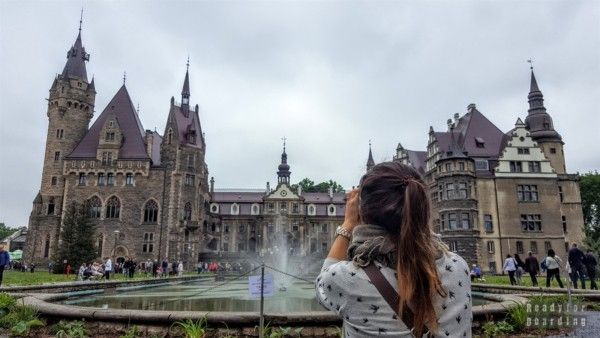 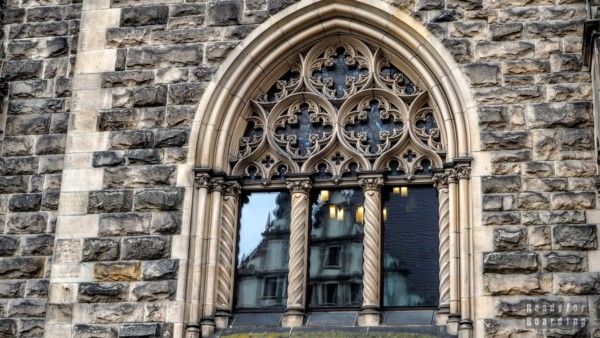 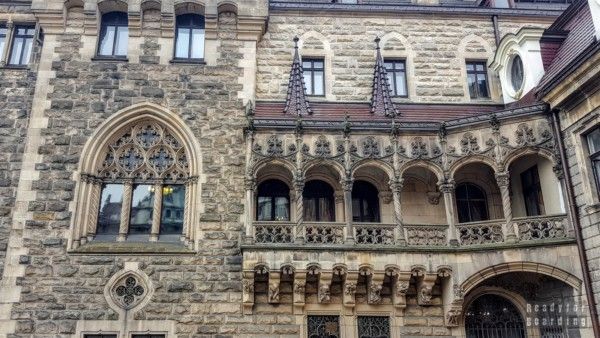 Of course, we absolutely wanted to go inside, so we had to buy a separate ticket (10 PLN/person) and wait for a tour, since the tour is only possible with a guide. Our entrance was in 45 minutes, so too short to eat something in between (the queue to the restaurant was long), and too long to sit back and wait.

Prices are currently as follows: 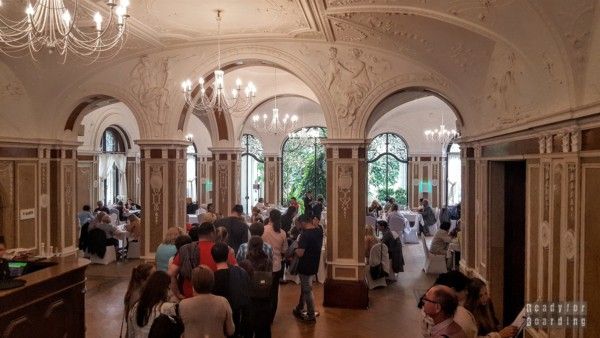 We wandered around a bit inside, went out to the park again, and at the stated time we waited in the small lobby, by the reception desk together with a group of about 20-25 people. 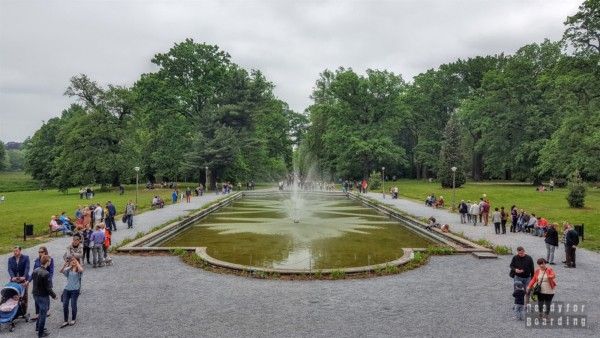 The tour takes about 45 minutes. During the tour the guide tells about the history of the castle, describes each room we pass through, as well as presents many interesting facts.

We won't write about what you can read about on every other blog (we checked, the most common information is that there are 365 rooms and 99 towers and turrets – although we haven't counted them so far ;)), but we will write what you can see for that extra ten, m.in.: Chapel, Salons, Gallery or the magnificent Library. 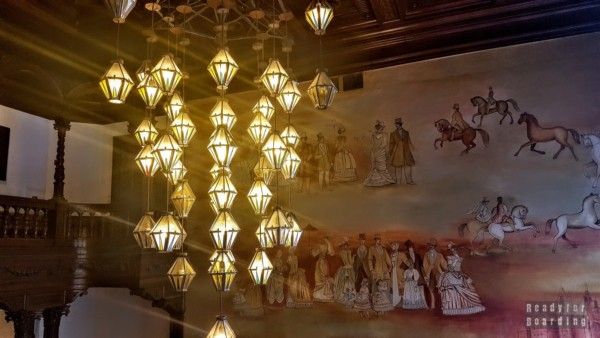 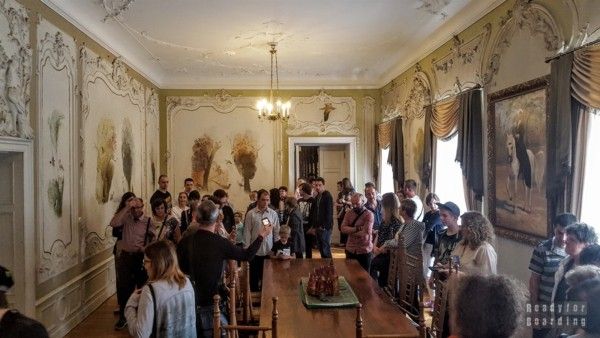 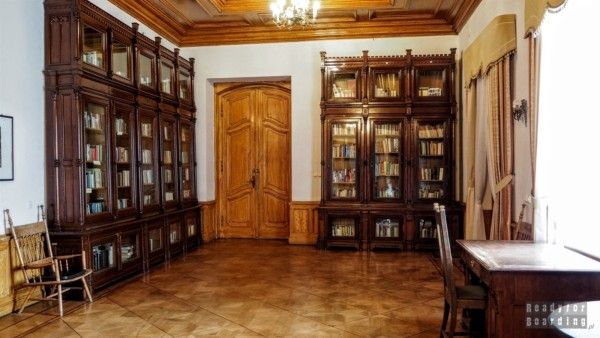 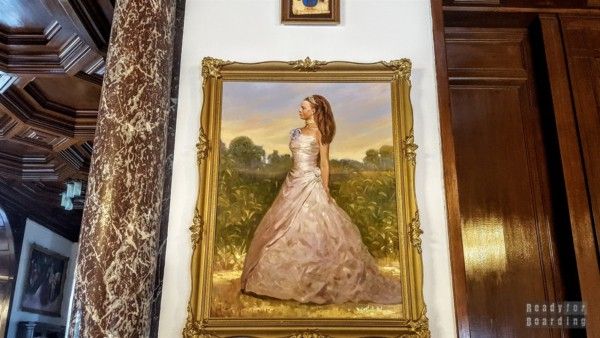 Unfortunately, the interiors disappointed us a bit… The Chapel and the Count's Room were impressive, but the other rooms were very austere, sparingly furnished or equipped. Anyway, the guides say at the very beginning that there is little left from the glory days – most of the valuable things were destroyed and looted, mainly during the Russian raid in 1945. 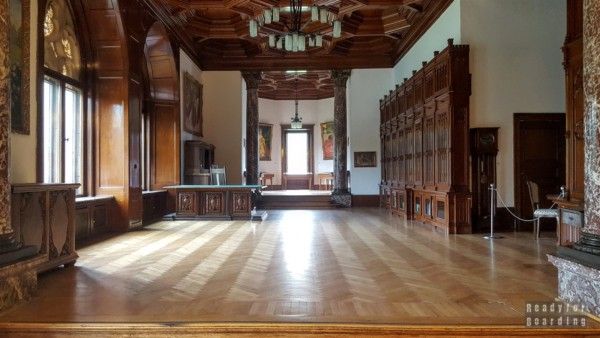 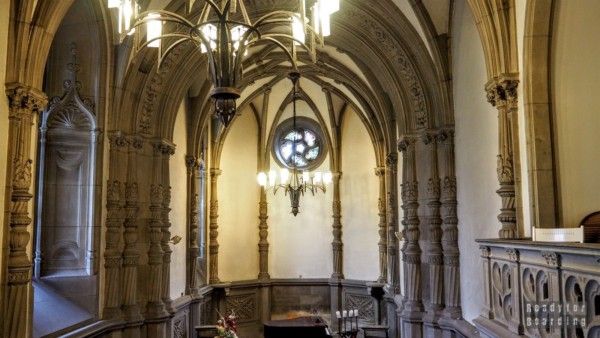 And so, for example: in the entire castle there are 33 fireplaces, of which only one works,no paintings or original chandeliers have survived, there is only one original mirror (!). It is puzzling that the guides have a lot of knowledge about what went on in the castle, but on the other hand there is a lack of documentation or detailed information (e.g. we know that there was an orchestrated hunt for animals imported from Africa at the site, during which almost 3,000 animals were killed, but it is not at all clear what they were).

The most valuable thing in the whole castle is the door, or rather the beautifully decorated entrance to the Count's Cabinet, also known as the Library. 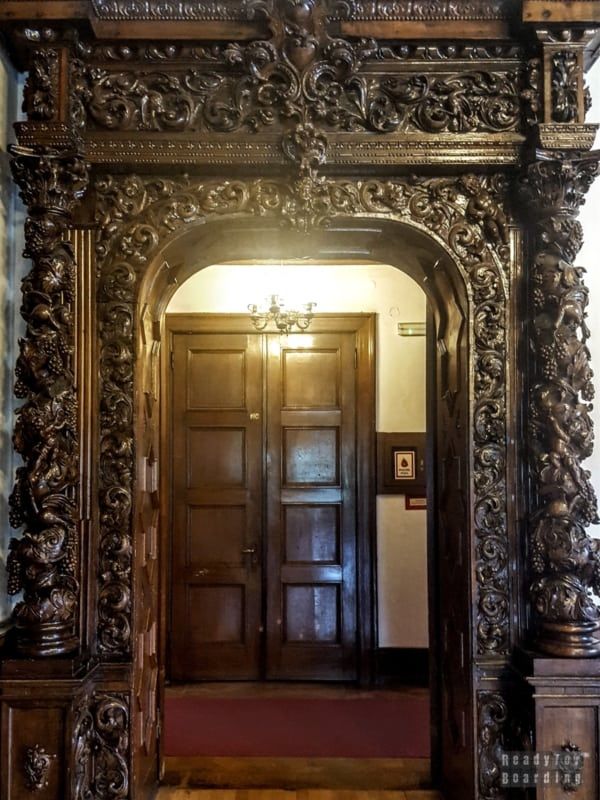 Is it worth visiting the Palace in Moszna (Moszna Castle)?

We lacked any kind of map, leaflet or at least captions for the various exhibits – we were relying only on what the guide would say, and even with hearing everything there were sometimes problems.

As for the castle tour, the price is adequate for what we saw inside. 10 zloty is not a fortune, and you can really learn a lot about the history of the place. The interiors aren't mind-blowing, but that's not what we expected either, but the castle is most impressive from the outside.

If one would like to enrich the tour, one can also enter the castle towers, the stables, take a ride in a carriage or on horseback. There is something to do. In addition, there are quite a few attractions for children, but we don't know to what extent they are there permanently and to what extent they were just on the occasion of a long weekend.