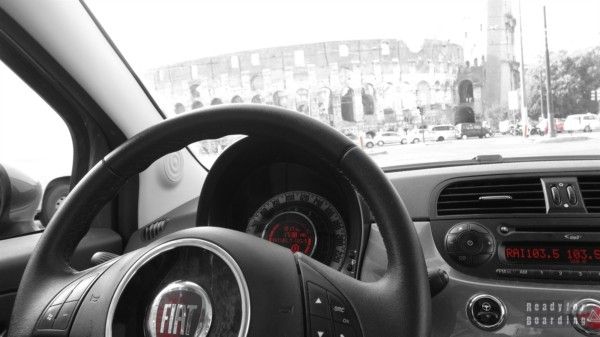 Italy – a few words about communication

Summing up our recent trip to Italy, it is safe to say: as soon as you step out of the station, a tourist gets a little shock, because it turns out that as a pedestrian he is not at all privileged! 🙂

By car in Italy

This is simply the way to get around Italy! As Paul stated while driving around downtown Naples: "everyone takes care of their front end and drives on". And a lot of truth in this – as a pedestrian, do not go under the assumption that in the lanes is everyone will let you pass, because you will quickly find out that not necessarily. Horizontal signs on the streets are there to be, not to show how to drive. Everyone drives as they please, shoves in (although traffic lights are generally obeyed), and you can hardly find a car that doesn't have a scratched bumper from parking.

As we were planning a trip to Pompeii, while still in Poland we booked a car. (It turns out that it is cheaper to go to the airport and pick up the car from there than from the city center.) We got a lovely Italian 500tka! Remember, however, that driving is quite a challenge, mainly because of the driving style… and that the further south you go, the more “wild” 😉 The road markings themselves (especially in the cities) are also poor, so it is worth having a GPS.

Already enjoying the goodness of a GPS, it is worth choosing free roads. Highways are generally expensive. For what it's worth, the alternative roads are not usually in poor condition, and they certainly offer beautiful views. An example of this is our route from Rome to Pompeii via Naples. In one section you drive along a beautiful road by the sea itself cutting through the rocks.

However, here it is worth using the highway itself to get around Naples, well, unless you want an extra 60 minutes of fun in the center of Naples 😉 This is also how we packed in the first time. Paul had fun, however, the whole team hardly went down with a heart attack, as they drive! Just to get around Naples (from/to Pompeii) you'll pay about 2 Euros (one-two gates), and you'll gain up to an hour of travel time!

As we have already written, in Rome we prefer to get around on foot. Cheaper, healthier and more to see. However, if you no longer have the strength, you can always buy a single ticket and drive those few stops.

Everything generally depends on where your accommodation is located. Ours was not in the very center, but we hardly used the benefit of public transport and even walked to the Colosseum or Vatican City, which is about an hour away on foot.

Remember that some passes to the sights also offer free public transportation. Or if you prefer to use the subway or other means of transport (streetcar, buses), you should also consider buying a multi-day ticket, it will come out much cheaper.