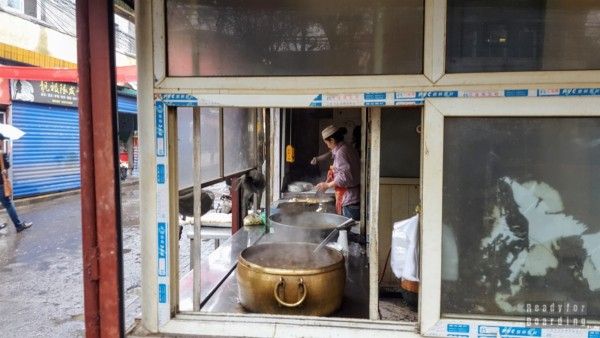 Beijing – where to go shopping and how to bargain?

China is a country where anyone, even mediocrities in haggling like us, will negotiate a good price – you just need to know where to go shopping, discern the market prices and… In this post we will write a few words about the secrets of haggling, Chinese fakes and silk! 🙂

We imagined China to be a country of plastic souvenirs, crap toys and gadgets that nobody needs. We have complained several times in our posts, especially from our travels in Poland, that when approaching popular places we had to squeeze between stalls selling Chinese food.

And that's the kind of Chinese food we expected to find in the Middle Kingdom. However, it turns out that the Chinese are betting on exporting souvenirs 😉 Under many attractions there were indeed stores, but there were far fewer of them than in other tourist destinations around the world, the selection was truncated, and they were in no way attractive or interesting.

Perhaps this is due to the fact that, however, the traditional Chinese family does not stock up on such gadgets? Local tradition dictates that people bring back various souvenirs and gifts from their trips, but instead of buying lightsabers they opt for food items such as eggs or milk packaged in pretty, decorative cardboard boxes! Of course, itinerant trade is there, solicitors are there, but it is something that we expected here and in no way disturbed us (the most we could experience was at the Great Wall and the Terracotta Army).

What else we imagined? Fakes, Fakes everywhere! Not only clothes, shoes, but also equipment, cosmetics – everything. We wondered how we would distinguish the fakes from the originals? Won't they pull something? We've read about fake stores, such as the whole Apple store, where even the employees were saintly convinced they worked for Apple! Such things only in China 🙂 We didn't want to buy fakes, we're against it, but we were very puzzled about what the situation is like in Beijing, so we often looked into stores and shopping malls, just out of curiosity.

Actually, the Chinese counterfeit quite a lot. Let's start with shoes and clothes. Walking along the streets of Beijing or Xi'an we came across stores where in baskets or big cardboard boxes you could win Adidas, Nize or other fancy brands for pennies, but the quality of workmanship was so poor that they probably wouldn't make it to Poland. There were also better counterfeit products, but prices surprisingly were then significantly higher, sometimes higher than the price of the originals in Poland.

We also saw whole fake stores, which are theoretically private label, but we probably do not need to hint at what brand they pretend to be? 🙂 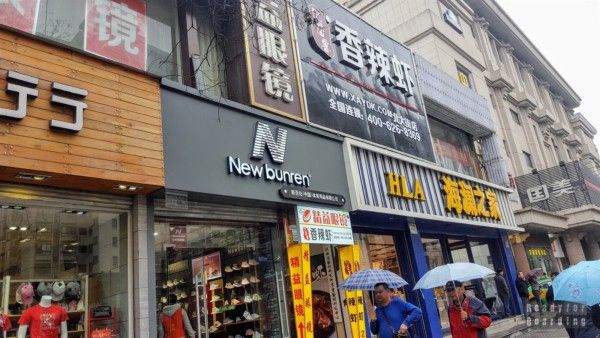 Curious about prices? Men's New Bunren shoes – about 400-500 yuan, original in the store New Balance On the other side – 600-700 yuan. Worth? Answer this question for yourselves. Although some models had almost identical prices on both sides 😉

What's New Balance! You are familiar with the American chain Walmart? Rest assured, you can also find this American chain in Beijing. And so! There you will also find its fake (although that's probably too big a word) called… Wumart 😉 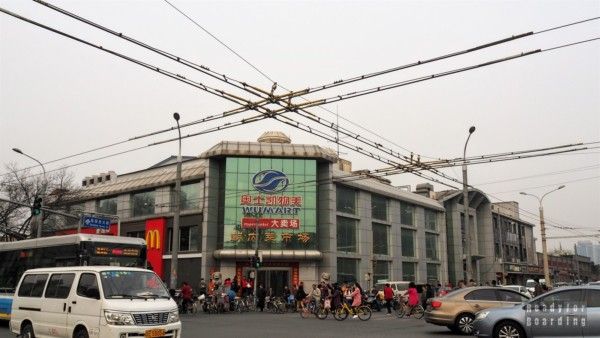 What else surprised us? The topic at our place is very topical – baby carriages. There are very few strollers in China, but when there are they are small, sleek ones like ours Yoyo. Well, that's right, almost like… How many fakes of this stroller we have seen is impossible to count 🙂 Already leaving aside the popular Yoya, but we also saw Yuyu, Vovo, Beyo, etc. All similar, yet if you look closely you can see that they are underdeveloped. 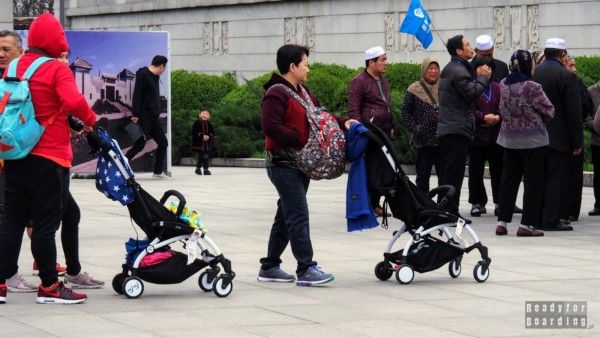 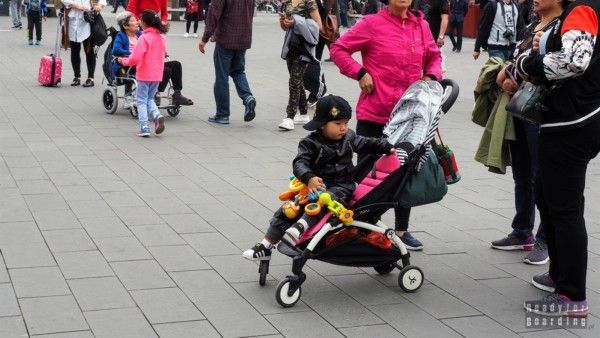 However, if you want to really indulge yourself among the Chinese stalls, it is worth going to one of the several department stores (so-called "Markets") in Beijing: Silk Market, Yashow Market or Pearl Market – are great (huge!) department stores, where you can find almost everything on AliExpress 🙂

We came across one by accident, by the Temple of Heaven – HongQiao Pearl Market. This multi-story market offers electronics, gadgets, toys, clothes, shoes, handbags, scarves, jewelry as well as traditional Chinese products and souvenirs. 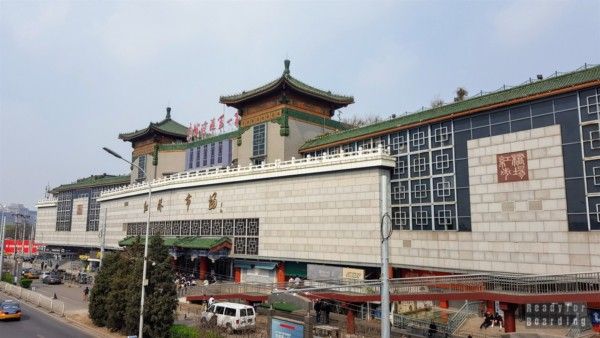 On each floor you will find something different, and praise them for dividing the floors thematically, because it saves a lot of time though 🙂 Stepping inside, you can feel like you're in a real bazaar, where everyone will invite you in, encourage you, and all you have to do is glance at something and you're already a potential buyer. No chance, to quietly approach, tinker, look around.

Note, this is the place where we met the most Chinese people who speak English 🙂 No wonder, whole busloads of tourists drive up here, and as soon as they walk through the door they are attacked by vendors. Here we also met Poles for the second time (the first time was at the Great Wall). 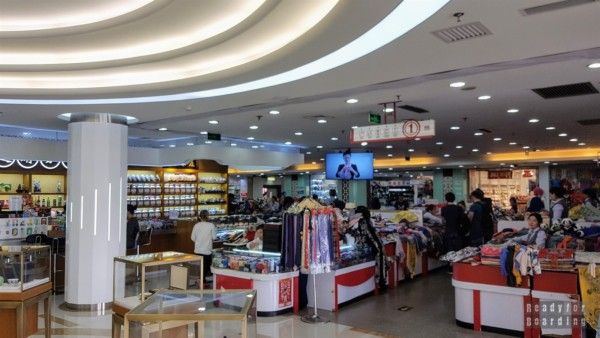 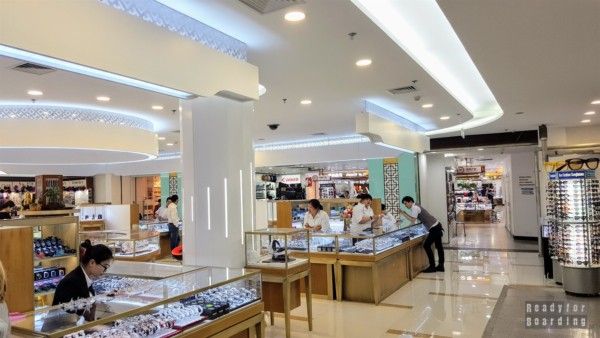 Yes, it is tiring. Me, I like to slowly walk around, look around what is there at all, what I like, and not immediately go into specifics. But I'm indecisive by nature, so even after walking the length and breadth of the market 15 times, I wouldn't know what I liked best 😉

Nevertheless, and for the undecided and picky, there will be something too. I made up my mind that I wanted a smart backpack in a particular color and size. Unfortunately, we couldn't spot it anywhere on the stands, but you just have to say what you're looking for and the salesman will show you a catalog right away, where he has all possible colors and shapes, and as soon as you decide, he flies somewhere to the underworld and brings you what you need 😉

How the prices are shaped? Cosmically! Out of curiosity, and at the same time driving the salesmen to a frenzy, we approached and asked about prices, even though we were not interested (better to avoid this, because later they chase you through half the store, but curiosity does its job). For some woman's handbag they may want as much as 800 yuan (with up to 300 going down on a good day), a razor 1,000 yuan, magnets 20 yauns.

These are prices really out of space, and no one has ever paid that much there, as the price goes down right away. Such a starting price as an incentive is to show how much they like you and especially for you, a friend from Poland, they will go much lower. By the way, one wonders on what basis they price how much a tourist can afford…

How to bargain in China?

Anyway… how to bargain? Culturally, but firmly. It is best to assume right away how much you want to buy a particular thing for, but let it be a fair price (you can look on Ali what the actual prices are).

Remember that once you start bargaining and come to an agreement, you should buy this thing. Let's take each other seriously. What it looks like in practice? We wanted to buy the aforementioned backpack, starting price 800 yuan (for a non-branded one. ), before I said anything it already cost 700 (reliable calculators give advice). When I said that it was definitely too expensive – 600, and when I repeated it another 5 times, it went down to 400 🙂

Then they ask what my price is. So I quoted 40 yuan and then the bundle started in my direction 😀 I heard how I wanted to rob them, that they had to earn something, that they didn't want to pay extra, etc. etc. Better not to listen 😉 They offer their price and you raise it slightly.

When it comes to the 'Final Price' give the price you are really able to pay, even though from the Chinese side from the 'Final price' (i.e. given by him) will still go down, and a lot of it. In the end it stood at 80 yuan, or about 50 zlotys (1 yuan is about 0.60 zlotys). Is this a crazy bargain? Depends on how much someone is able to pay. I left satisfied 🙂

Remember that, in truth, no one will sell you anything below cost… I am convinced that a Chinese would sell his even cheaper, but, after all, it is also not about killing each other for every yuan. See, the customer is happy because he bought a backpack for 10% of the original price (which I will remind you was from space), and the seller still made a good profit on it.

What else works? We have referenced prices from AliExpress a few times and that helps too. To reiterate: it's not about being some horrible scrooge, let's be fair and honest. Chinese people working there are masters of role-playing, don't be fooled, but take them seriously.

What and where to buy in China?

What is worth buying? There is something good for everyone 🙂 We bought small gadgets for cell phones, scarves, small jewelry and, of course, magnets 🙂

However, when you get tired of this haggling, hounding, you can shop in typical markets e.g. In the aforementioned Walmart and Wumart, or Carrefour as we know it. The selection of items is quite large, both grocery, cosmetics, as well as home furnishings, baby items, etc.

Of course, it's hard to look for familiar products here, although in each store there was an aisle titled "world food", where you can find something closer to us (there was Polish powdered sour soup. ). 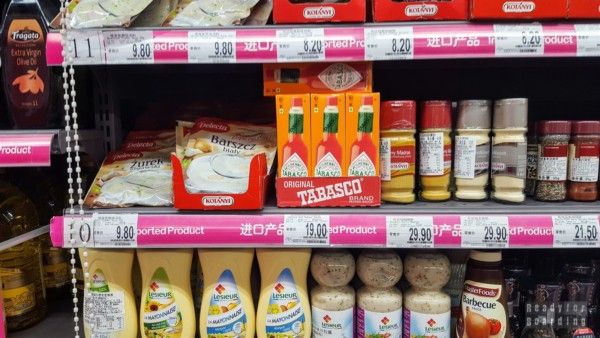 Unfortunately, most of the inscriptions are in Chinese and it's hard to figure out what's what. You can buy ready-made meals, Chinese soups, drinks, etc. for that. Fruits and vegetables are expensive, better to buy them at stalls or small stores.

Also, food is better to buy ready-made on the street – it is cheaper, freshly made, well, and we save time. We didn't have anywhere to cook in hotels, so really all we ate was either in restaurants or take-away. And it paid off for us – we were able to eat lunch for a few yuan and we were full, plus we tried the local cuisine.

Of course, there are plenty of grocery stores on the streets (e.g. known 7eleven), where you will buy drinks and snacks, so you will not go hungry 🙂 Prices vary, although from our perspective it is cheaper than in Poland (especially if you buy in big hypermarkets), in small kiosks prices are similar to ours. Fast food both local and western are also ubiquitous.

Shopping in China, especially those with bargaining, is quite an experience. A tough but interesting experience. Actually, you can buy quite a lot of things, cheaper than in Poland, but in the age of Aliexpress it comes out to the same thing if you buy them online, or at least you save the lifting. The advantage is certainly that everything can be seen, touched, so you can see what the quality of workmanship is, rather than buying a cat in a bag.

Leaving aside department stores, ordinary grocery shopping has also been a challenge, but once you get the hang of it, you can master communicating by sign language to perfection 😉