What are "those" hutongs that everyone talks about coming back from Beijing? Why there is a public toilet at every turn in Beijing? Are you curious? We hasten to answer 🙂

We continue our walking tour of Beijing. In a previous post we described two temples: Harmony and Peace (Lama Temple) and Confucius. There was something for the soul, now something for the body 😉 We went in the direction of hutongs, with the intention of tasting some local, traditional delicacies… although this is not the only thing you go to these areas for 🙂

What are these hutongs?

At first we thought it was such a small residence, with a courtyard in the middle and chambers and utility rooms all around. Such a vision germinated in us when we were looking for a hotel in Beijing. We saw pictures of one-story buildings around a nicely landscaped courtyard, and we absolutely wanted to spend the night in such a typical Chinese hutong.

However, our notion was far from the truth, if only from the point of view of the definition, which, despite appearances, is not quite so clear either. 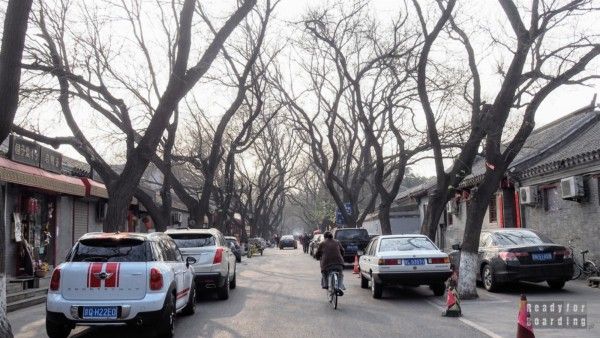 According to some sources, these are just courtyards surrounded by houses, according to some, whole quarters of houses, and according to others, whole streets. According to us, hutongs should be looked at from a slightly broader perspective, because it is an entire street or avenue with traditional Chinese single-story buildings (by the way, streets have hutongs in their name ;-)). Walking down such a street, every now and then you see gates to better or worse developed courtyards (siheyuan) or just even narrower alleys along which there are houses. Although it is often so narrow that a bicycle can barely fit through. 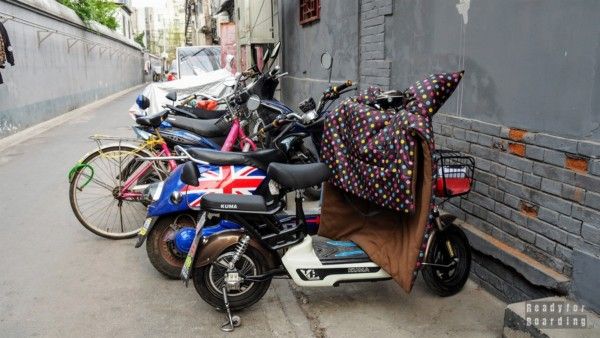 It wasn't until we walked a few such streets that we changed our notion – these are not grazed haciendas with courtyards decorated with plants, statues or fountains. In fact, poorer citizens live here, and these houses are cramped, small, neglected… sometimes it's frightening to look in, because there is a veritable junkyard lurking in the hallways and in the yard. Of course, we exaggerate a bit, because there are also nicer and more well-kept hutongs, but it's the poor ones that are more memorable to us, though. Something like the dirty and shabby tenements in the centers of Polish cities. 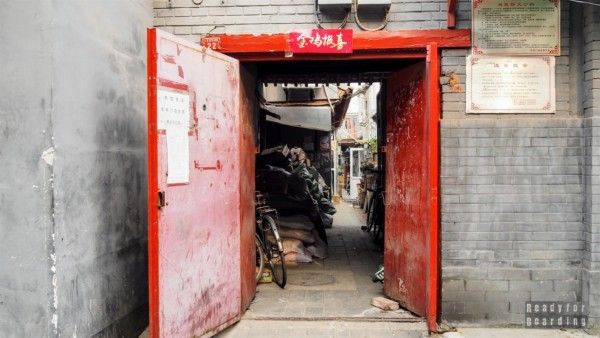 The same goes for the streets where the hutongs are located. Their condition varies greatly: some are renovated, landscaped, there are trees planted on the road, and some are so frightening to walk on, because you have the impression that something is about to fall on your head or you will trip over something. The houses are small and cramped, a lot of things are kept outside, and since the courtyard is not always big enough, things are also kept on the street. Also on the street hanging laundry, among thousands of cables winding between poles. 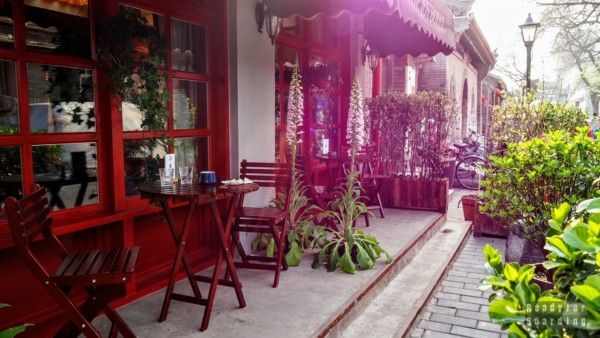 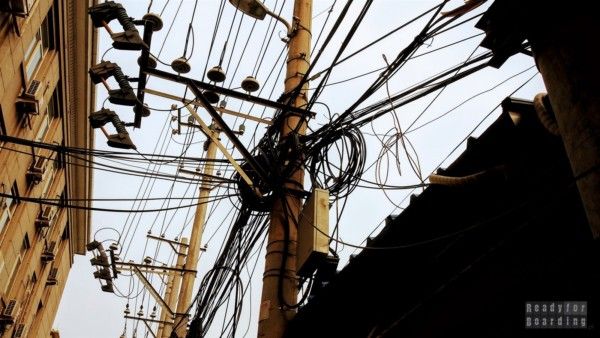 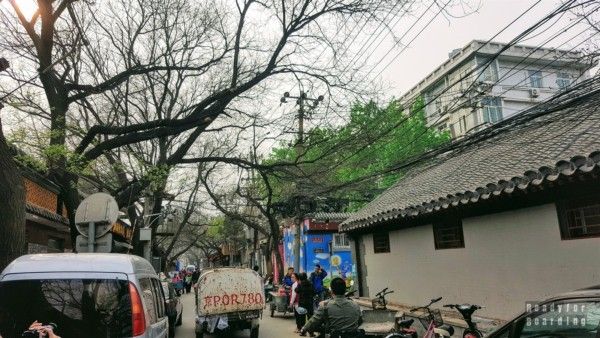 And what about the sewage system? Well, for a long time there was none, and hence the city set its sights on public toilets. You will find them almost at every step (more often than pharmacies on a Polish housing estate, literally! ;-)). Arguably, it was easier than hooking up sewage systems and installing toilets in every household, and with public toilets, the problem of dirt on the streets was eliminated. It depends where, but if you enter some backward public toilet you will quickly leave it … Of course, where there are more tourists is much cleaner 🙂 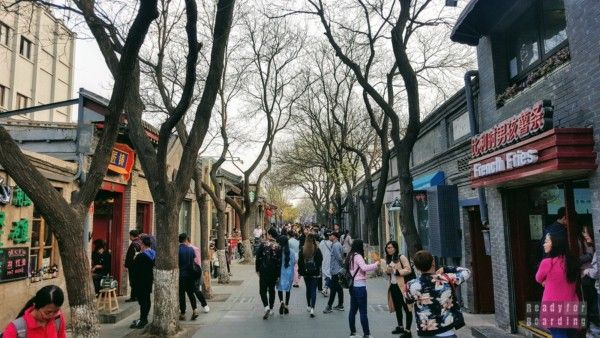 Similarly with heating – Rarely will you get central heating in any of the houses within the hutongs. The hostel where we stayed within the hutong simply had air conditioning and a separate portable heater. Nevertheless, it can be difficult in winter, as the doors are thin with large clearances and the windows are old and wooden, from which the cold blows terribly.

Hutong residents spend time together, use common toilets, share a courtyard, and are probably more closely knit with each other than those who have migrated to the modern skyscrapers being built where hutongs stood just a dozen years ago. Many hutongs have stores, restaurants, service outlets… You could say it's like a city within a city.

Hutongs have become a major tourist attraction and some of them are experiencing their second youth – turned into hotels, restaurants, stores, they please the eyes of visitors. One of the nights in Beijing we just had in a traditional hutong, but about that another time.

But let's go back to our walk. We headed in the direction of the street Nanluogu Xiang, Where the outgoing streets are just such typical hutongs. The aforementioned street surprised us and at first we had the impression that it did not fit here – it is full of people, bustle, noise, neon signs, colorful signs. People crowd, shout, and queue for the many places that provide delight to the palate. 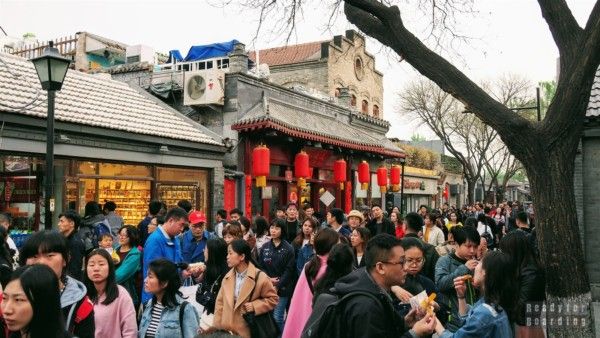 Here we can try many interesting, international and original snacks and dishes, with most being typical street food. We expected to find typically Chinese restaurants here, and they were scarce. Baked curly potatoes, bubble tea, ice cream in bubble wafers and other 21st century inventions dominate. 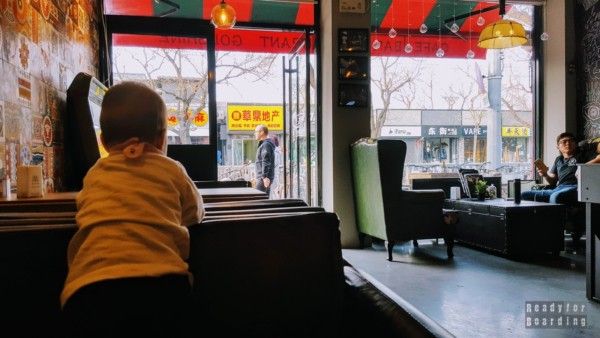 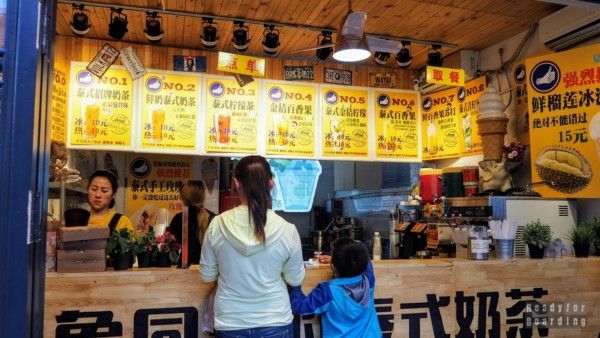 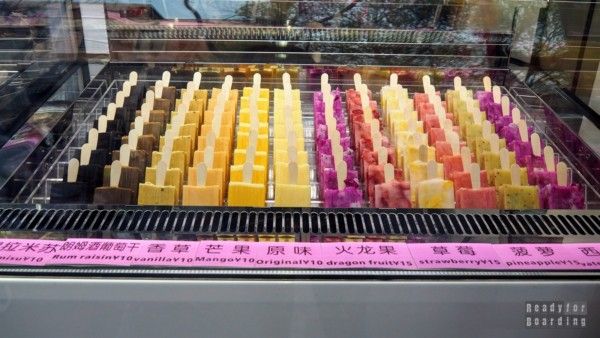 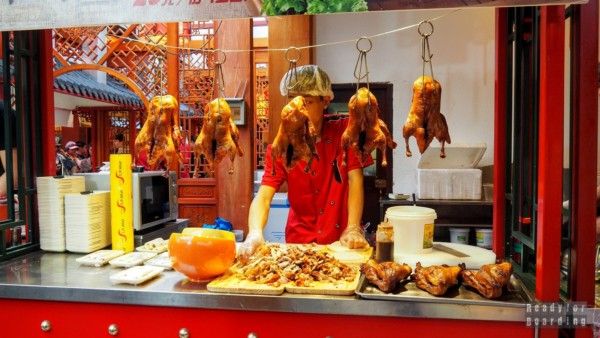 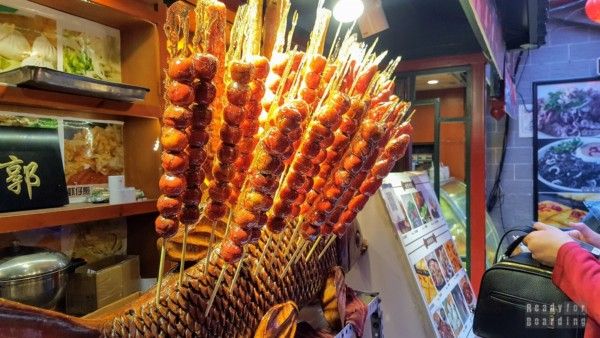 We felt like we were in a fashionable and happening place here, and were immediately reminded of a neighborhood in Tokyo – Harajuku. In addition to food, here you can also stock up on gifts, Chinese tea, china, etc. However, once you stop looking only at the storefronts, it is an interesting combination of tradition and modernity, because there are still a lot of buildings that have retained their traditional appearance.

Despite appearances, we liked this crowded street. We like such places where you can see a lot of locals, what they are really into and interested in. We caught ourselves standing for a few minutes in front of a window serving ice cream, by no means to try to understand the menu, but we watched as people the first thing they do after getting ice cream is immediately take a picture and cycle to their blocked internets 😉 We couldn't have been worse 😉 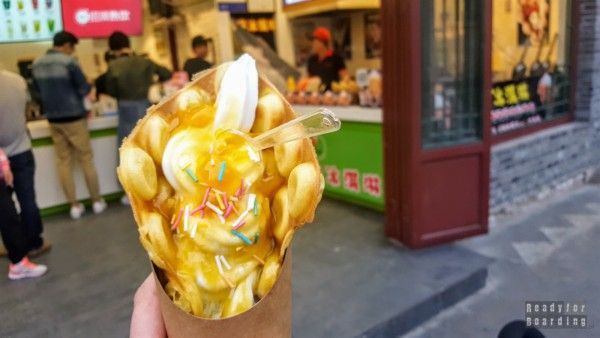 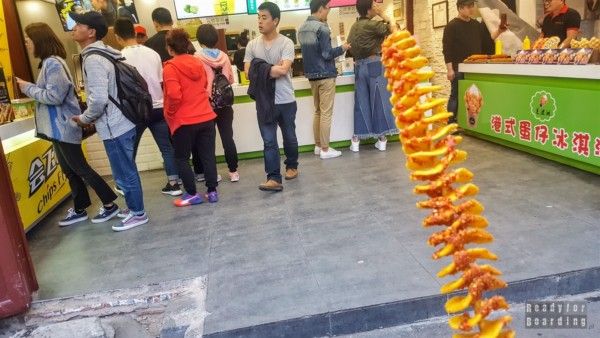 However, if you are not into this kind of atmosphere, we have good news: fortunately, the side streets are a completely different world. Turning into a side street, it's much quieter and more peaceful as the mainstream continues to flow along Nanluog Xiang. Here you can take a break from the noise and watch the low-rise buildings, the gates to the courtyards, and you may even be able to take a peek into one of the?

Interestingly, these streets are very guarded. There are guards on the corners, including at the entrances to the hutongs (sometimes we even had the impression that they wanted to search us, but they never even stopped us).

The most beautiful hutongs?

We especially recommend you to bounce towards the small river flowing along the street Dongbuyaqiao Hutong, And then continue walking all the way to the lake (Qianhai). It was one of the biggest surprises in Beijing! 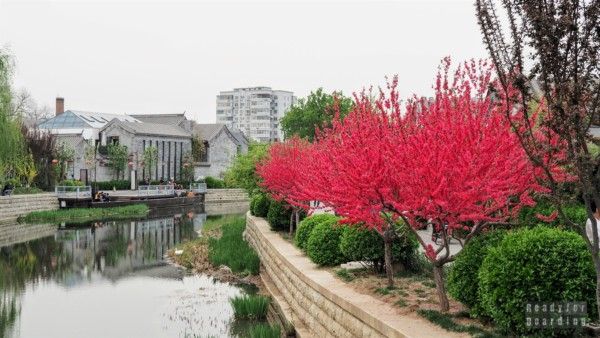 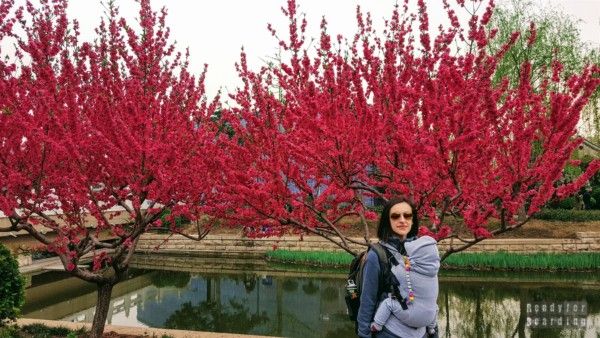 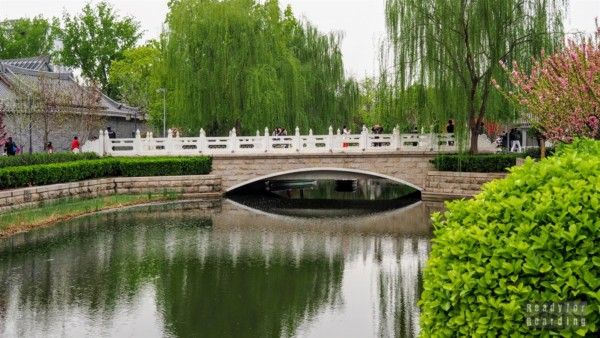 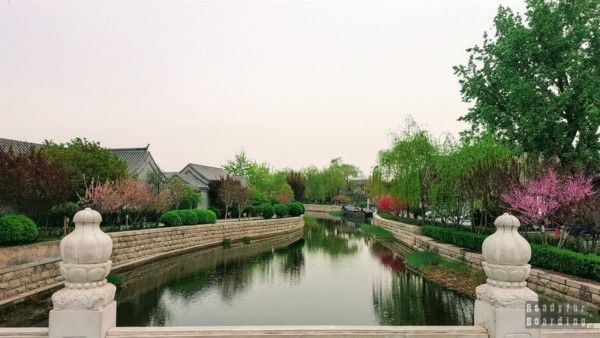 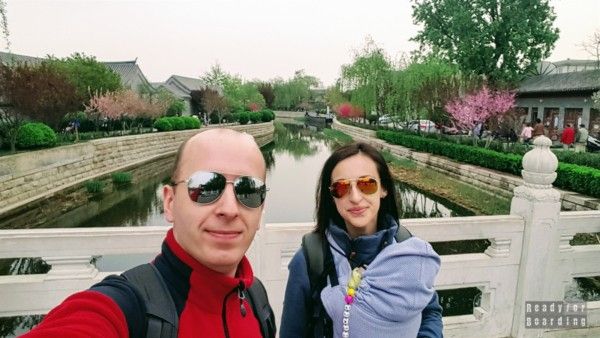 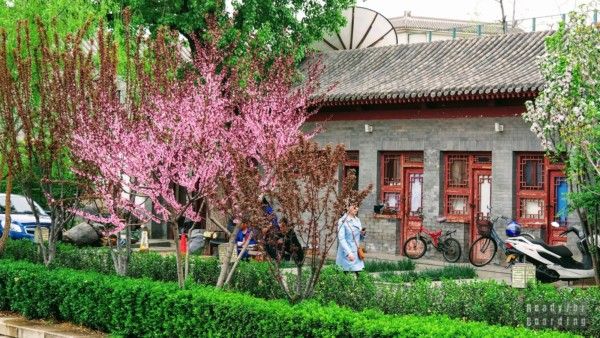 We suddenly ended up in a completely different place – renovated streets and sidewalks, a flowing river, white romantic bridges and beautiful blooming white and pink trees. 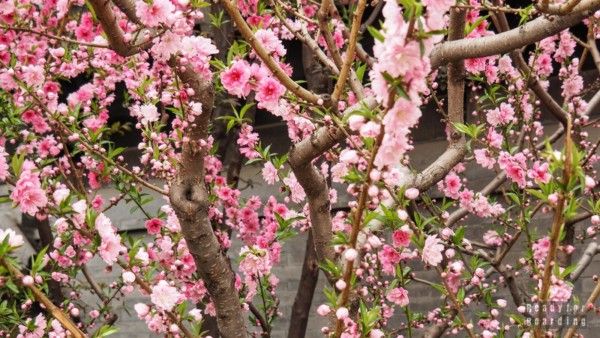 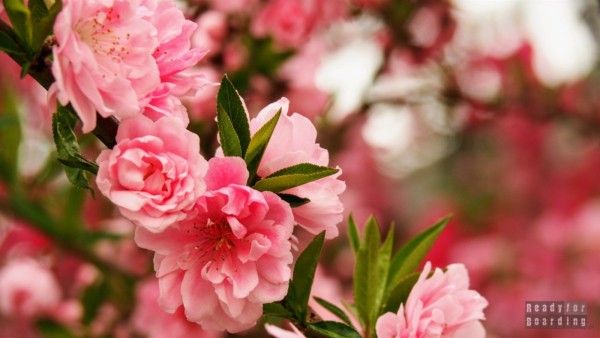 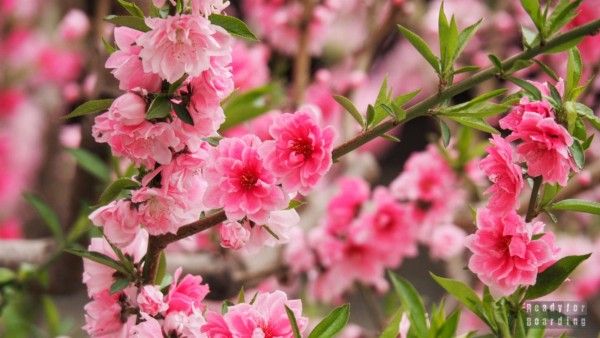 We did not expect to see such a charming and peaceful place in the center of Beijing outside the park areas.

Finally, we recommend our gallery of the hutong and the surrounding area: