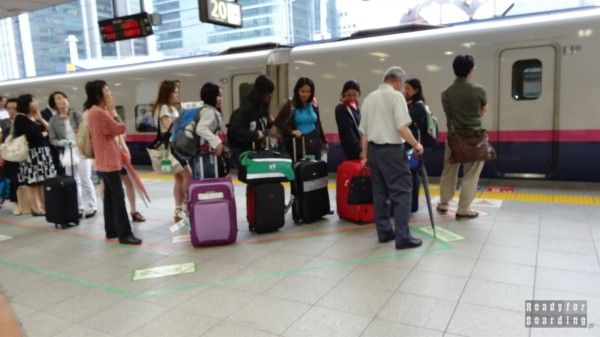 How to get around efficiently in Tokyo? Subway lines stretching like spaghetti, several different transport companies, plus incomprehensible station names… And yet, it is, after all, the best-developed public transportation system in the world. What is important: punctual, modern, clean and safe!

Grid Tokyo subway is really sizable. At first glance, it is terribly difficult to grasp and understand what is going on here. Looks like cooked, colorful, spaghetti noodles specially mixed and tangled. Anyway, see for yourself 🙂 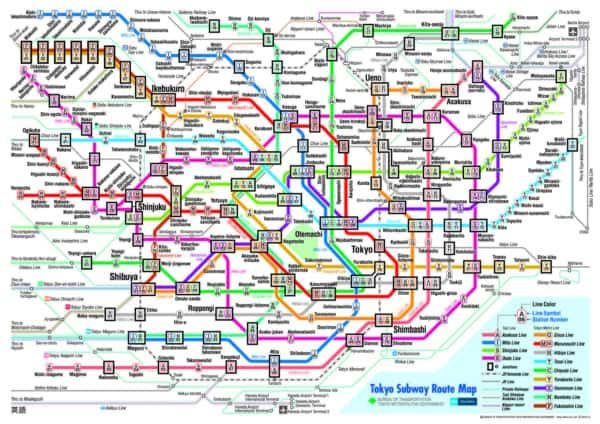 The metro itself consists of 13 lines, 4 belonging to the Toei Line and 9 to Tokyo Metro Line. These are independent companies and having a ticket for one company, we cannot travel on the lines of the other company. You can, of course, combine rides by buying a ticket at each metro station directly from the machine, specifying the starting and ending station, but these are more expensive tickets. In general, it is not important how you get to your destination (which line), but where you get on and off the.

In the photo below, the vending machines can be seen on the left (forgive the poor photo ;-)). 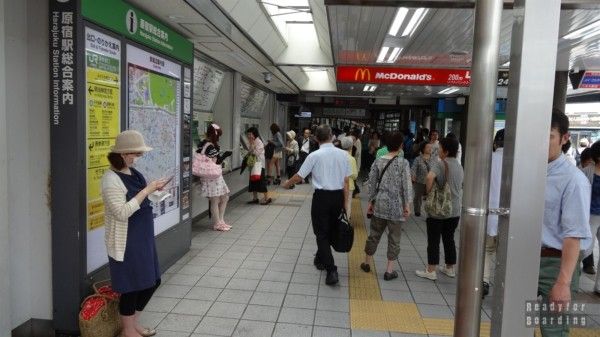 Tickets for city rides, like all transportation in Japan, are not cheap. Prices start as low as ¥160 for a single ride. Cheaper are those for routes within the Tokyo Metro Line and this ticket is recommended. The lines are scattered all over Tokyo so you can get everywhere without a problem. We recommend that it's best to get a 1 or 3-day ticket right away (the cost of a daily ticket is about ¥600).

The only exception is the line Yurikamome, Which goes to Odaiba island. The ride is not included in either daily or multi-day tickets, so you need to buy a separate ticket to cross the Rainbow Bridge. Supposedly the bridge can be crossed on foot, and it takes about 40 minutes on the bridge itself one way, but we were a waste of time and no pleasure in it either.

An alternative, or JR Lines in Tokyo

As an alternative to the Tokyo subway, there are numerous lines within the JR (JR Lines) Riding in and around Tokyo. Even more so if you have a purchased JR Pass. Our JR Pass did not cover our entire stay in Japan, because it was more financially advantageous for us to buy multi-day tickets to travel around Tokyo itself, rather than extending the JR Pass to two weeks (we had a 2-day ticket for public transportation in Tokyo plus a week-long JR Pass).

So we used the subway all the time. It was definitely easier, looser and more pleasant, because contrary to appearances, the JR lines are more congested than the subways.

Stuffers on the Tokyo subway?

Yes, they exist! We have seen the Japanese so called "subways". white-gloved upchuckers on the Tokyo subway system. Unfortunately, we didn't see them in action, but only guarded order, without any, unnecessary manhandling. The crowds just weren't that big. Everyone waits politely in line, and if they do not fit into the train, they just wait for the next one. After all, the next train will be in no more than 2 minutes… 🙂

We were really surprised by the organization of the platforms, stops – everything is perfectly aligned, the doors open exactly where they should, and people stand and enter the train quietly without any pushing.

What is the best way to travel?

In conclusion, in traveling around Tokyo, we strongly recommend the subway! It is impossible to see the entire metropolis in a few days on foot, and the subway is precisely the most convenient way to explore Tokyo. Getting around by bus can be complicated and more time-consuming.

The subway is punctual, clean and runs very frequently indeed. Sometimes seeing the back of a departing train carriage, when we walked to the middle of the station another one was already arriving.

It is also worth mentioning that some subway lines are made of so-called. Transitioning trains into commuter rail. It's worth paying attention to when you get to the Shibuya. In the subway drawings it might seem that this is the last station, yet this is not true. More people get on there than get off and go on… We figured it out at the last minute 🙂