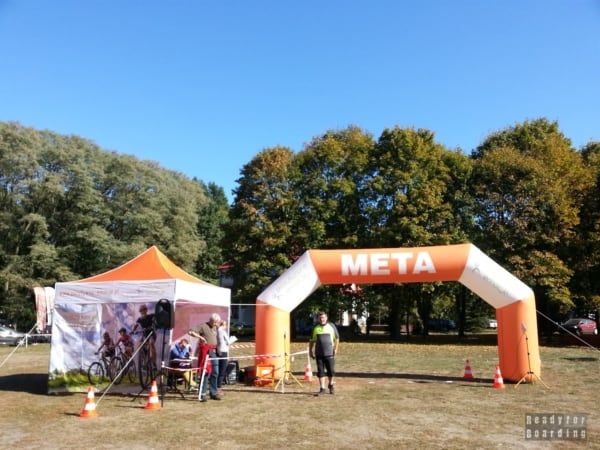 "ReadyForBiking" – or ready for freezing, that is, we finish the 2015 season in the Bolimov Forest

The weather outside the window is beautiful, but until you open the window. Autumn has started, temperatures drop below 0 degrees and it's getting harder to go outside. About our recent (?) the uphill bike ride in the cold you can read in our report on the last Bike Orient rally of the 2015 season. You are welcome 🙂

If you've been following our blog for a long time, every now and then you've come across posts from the bike rallies we participated in as team readyforboarding.pl 🙂 Since April, we showed up with our bikes in designated places and looked for points in the most interesting corners of the Lodz province (and not only). Unfortunately, all good things come to an end quickly and October inexorably arrived, and with it the last, final rally Bike Orient, This time near Skierniewice, or more precisely in the Bolimowska Forest.

The rallies also include a cup classification, which is won by the participants with the most points from the top 3 editions. Before 4. rally, in the Mega women's classification Kamila was leading, but the point differences were so small that everything was to be decided only at the finish line of the last rally.

The organizers surprised us with an earlier start time for the rally, so it was already 6 o'clock.30 We set off in the direction of Skierniewice. Initially, the thermometer indicated 2 degrees C, but as we approached the rally base, the temperature dropped to as low as -6 degrees C! 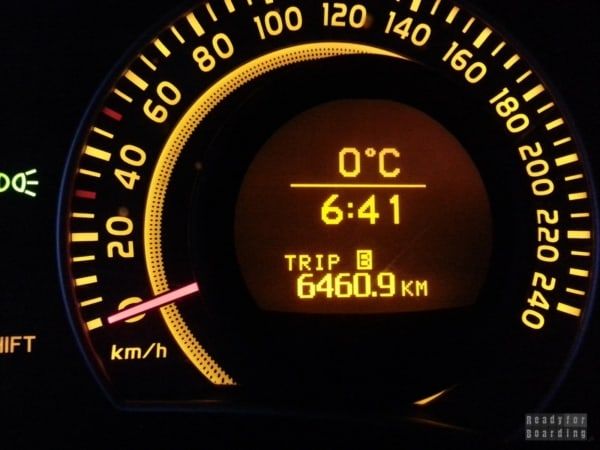 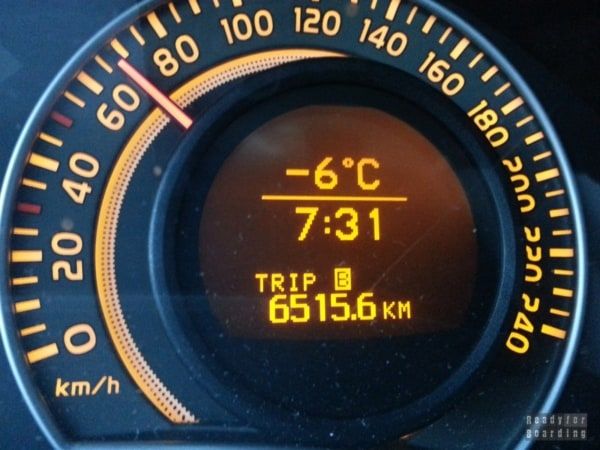 We are definitely warm-weather people and normally do not ride our bikes in such weather 😉 It is supposed to be fun for us in the first place, so so far we have not gotten on unicycles when there were negative temperatures. And we specifically used the phrase “Until now..” there is a good chance that this will change, because it turns out that it is not so bad. Fortunately, the low temperature was the only negative factor. Other than that, it was very sunny, without a drop of rain. 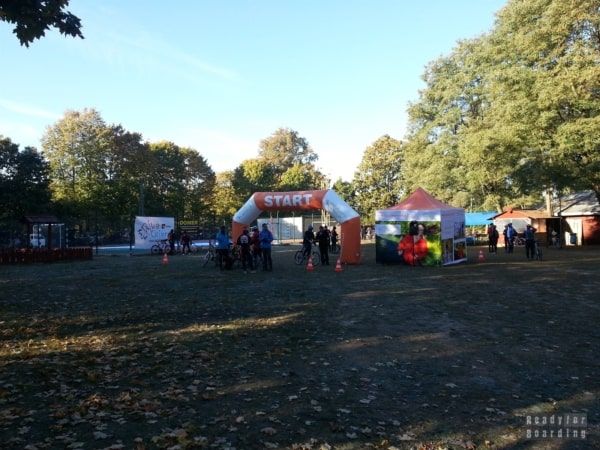 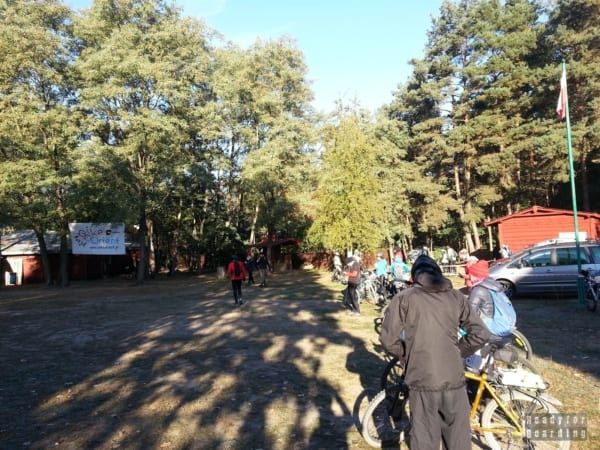 The start was scheduled for 9 o'clock.00, but we officially started at 9.10. In addition to the earlier start time, the organizers provided more checkpoints than usual – 13 (so far there was a maximum of 11). Since the terrain was completely unknown to us, it didn't really matter to us on which part from the base the points would be scattered. As soon as we got the map we planned our route and after the start signal we set off towards point No. 7.

Maybe we started a little too quickly, because we were going in the wrong direction, but fortunately we quickly figured it out and got back on the blue trail towards the stronghold. The first points have it that you ride in a crowd and, as a rule, this crowd knows where to go 🙂 Nevertheless, it is worth looking at the map, because a few times we would go wrong.

The beginning was tough, however, because it took some time before the body warmed up, plus the cold was getting the best of us. Our toes were almost falling off from the cold despite warm gloves. From CP No. 7 we drove to CP No. 20, which is a ditch that was easy to reach (except for one closed road). After this point, we were already cold only in the toes, and quite comfortable at the top, we could go on 🙂 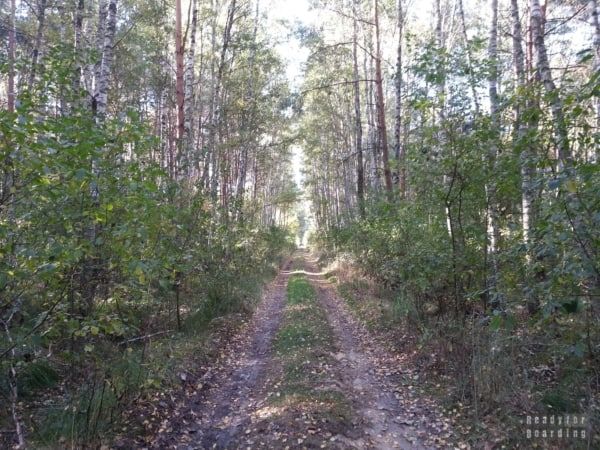 The next – PK No. 12, was also easy to locate, the road was straight and of good quality, no sand or mud. Then we rode towards the white road (Młynkowa Road), which we were to ride quickly to PK No. 3. As fast as we planned it was impossible to go, it would have been faster along the forest paths, but the important thing is that forward 🙂 CP No. 3 – We wanted to find the culvert from the bottom, but here we failed to count meters and eventually ended up on the green trail, from where we reached the point through a ditch. 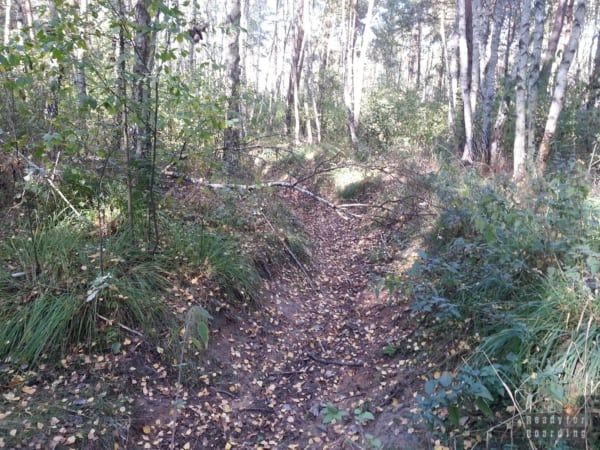 A quick return and we drove along the Durch Road to PK 18. We were a little puzzled by the lack of other cyclists, but as we always say to ourselves “everyone is already far ahead 😉 “. Only at the turn into the forest did we meet a group of cyclists. The lantern was right next to the path, so we didn't even have to get off the bikes in search of the point of the. From there we drove towards the yellow road and as soon as we were on it, I took another look at the map and either we can't count to 13 or we forgot one point. 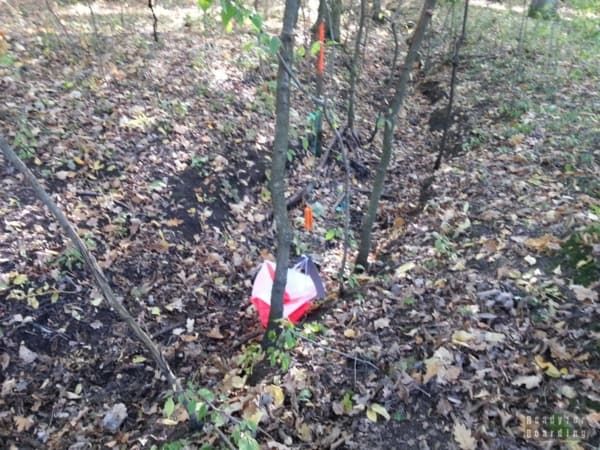 It turned out that one point was on the edge of the folded map and eluded us 😉 We were already on a paved road, and that too led us to PK #4, which was hidden by a ditch. Unfortunately, we made up kilometers and lost some time here (it was optimal to go from PK 3 to PK4 and only then to PK8). After CP No. 4 we had a longer stretch (about 7 km) without any points, we rode straight to CP No. 1 – buffet. 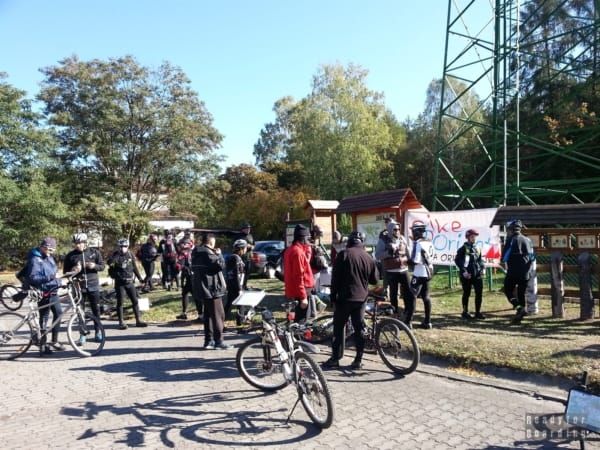 The coolest thing about buffets is that they are the easiest points no and you can meet a larger group of participants 🙂 Here we also realized that we hardly drank anything, because the water in the bidons was terribly cold, and for a sore throat it's not the best idea. It's not the same as at the previous edition in Burzenin, when the water even ran out (but then it was well over 30 degrees Celsius!). We drank an isotonic drink, ate some fruit and continued on our way to CP No. 19.

This was probably the first rally where we were not at all reluctant to cut through the forest. As a rule, we chose paved roads, but in these areas the roads were so well marked and passable that you could easily take shortcuts. The access to CP No. 19 was almost through some field with potatoes or something, so we had a chance to ride on the sand at last 🙂 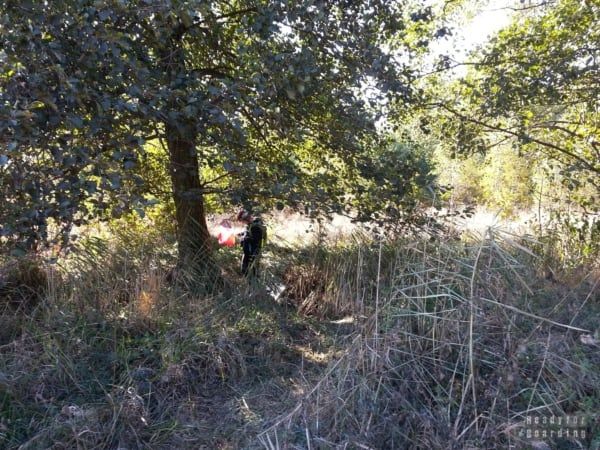 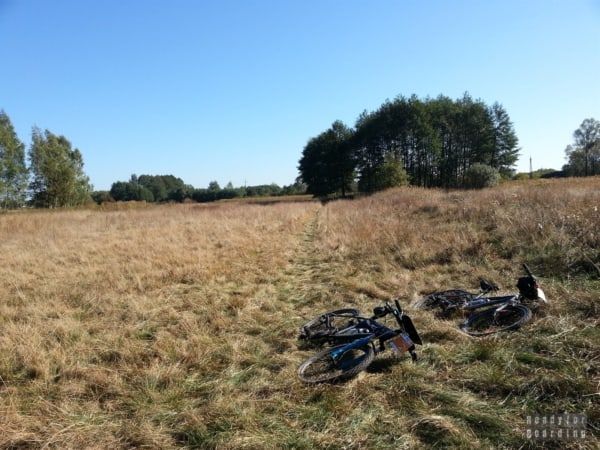 The next in the order was PK No. 10 – grave. Here the key was to find the forest path from the green trail. From the road it was faintly visible, but Kamila spotted a path between the trees with her efficient eye 🙂 The penetration was poor, but in about 100 meters the path was already very well visible. From CP No. 10 we drove towards the point that seemed to us the most difficult to locate – CP No. 2. The key was to hit the right gap between houses, measure the distance and find the right ditch. Thanks to a good exit from CP No. 10, we were able to easily find a suitable cut between houses. 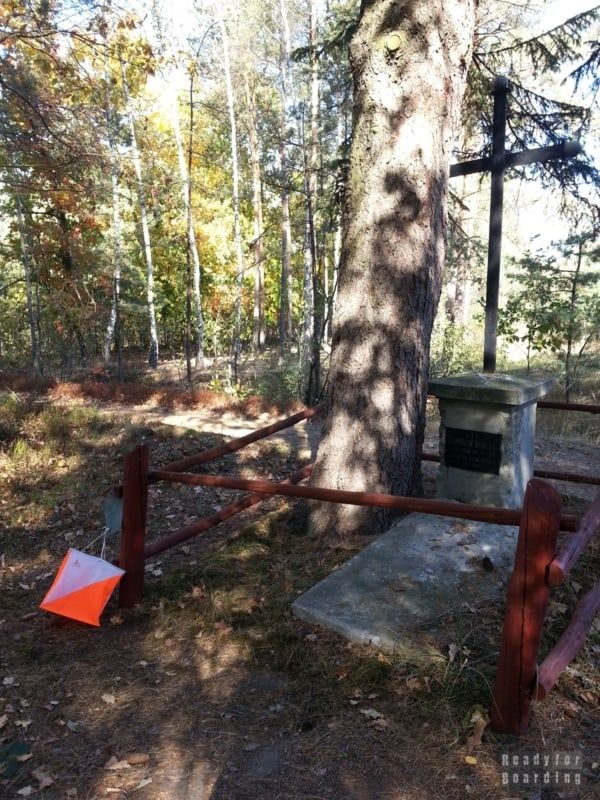 The ditch at CP No. 2 was very well visible, worse already with the lantern. Fortunately, we succeeded (although we were a bit tempted by everything that grew around us). From CP No. 2 we went to CP No. 5 – World War I cemetery. We didn't pay attention to the fact that we had planned a route from the other side of the river, but fortunately it was just a ditch and we managed to cross it on foot without any problems. Then PK No. 8, another cemetery and a lantern scrupulously hidden 🙂 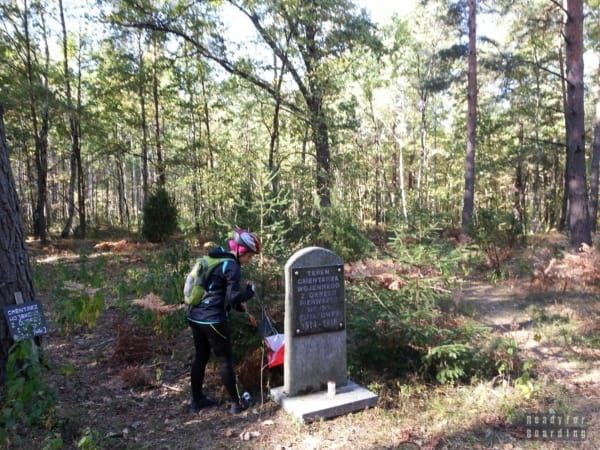 We had good time and only one point to find – PK No. 6 (a clump of bushes). It was one of several clumps in the field, but the lantern could be seen from a distance. 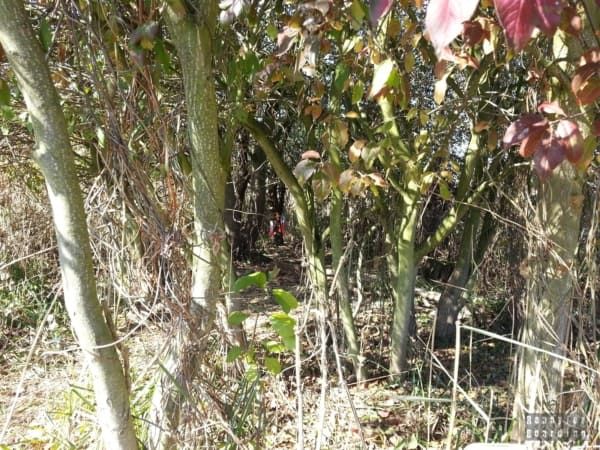 With a set of points we started the finish and after 4 h 15 min we crossed the finish line 🙂 Time for us almost a record, but Kamila took 4th place, and thus was not “on the box” neither this edition nor the Bike Orient Cup. It's a bit of a shame, but it is extremely gratifying to see the progress ourselves. We are going better and better, and thus having more and more fun 🙂 We no longer get lost so often, we catch our orientation faster (yes, even Kamila!) and accompanied by super emotions and atmosphere 🙂 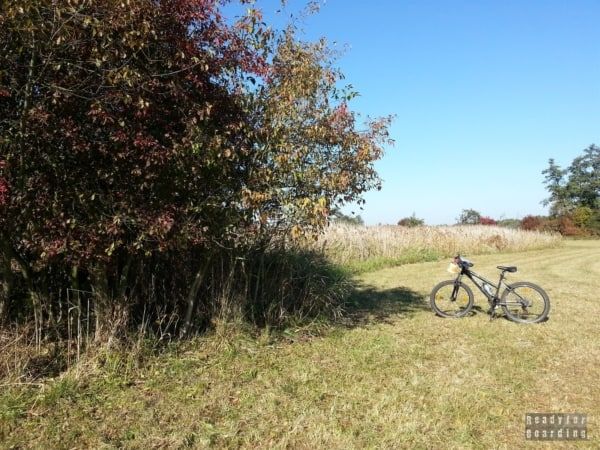 In addition, we found out that even riding in the cold can be fun, you just need to persevere and just get out of the house 🙂

We arrived at the finish line tired, but not exhausted like last time (although maybe that means we could have given more of ourselves?). As always, the organizers provided a warm meal (even vegetarian soup!) and barbecue. Unfortunately, this time we could not stay until the end, so after eating, we chatted a bit with other participants and returned to Lodz.

As always, congratulations to all participants who took part and we hope they had as much fun as we did. We thank the organizers for another super rally and we can not wait for the next season 🙂