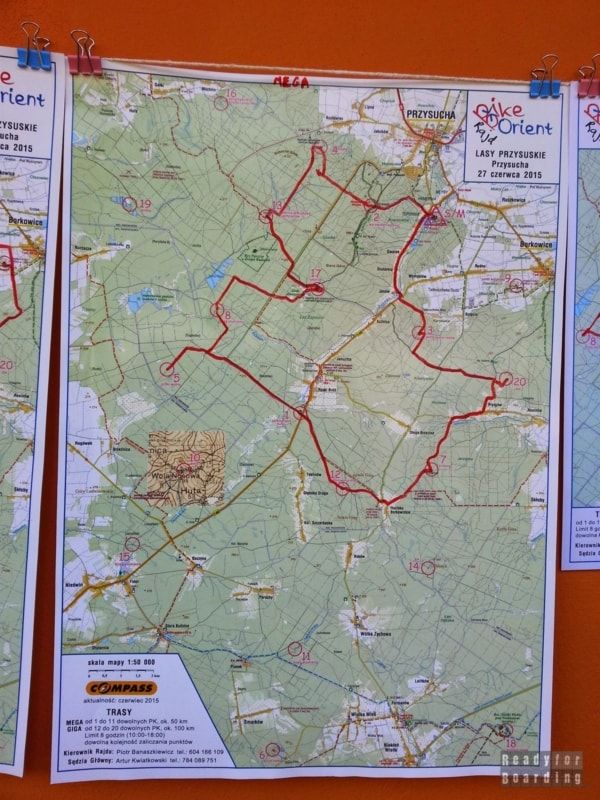 On the 27th. June (Saturday), the second rally of the Bike Orient series took place (we wrote more about this cycling event here).

The organizers really made an effort and I can safely write that it was for us toughest rally So far – both in terms of the route itself and the location of the checkpoints. Welcome to the report!

The rally took place near the town of Przysucha, and the checkpoints stretched towards the border with the Świętokrzyskie province. We had not had the opportunity to ride in these areas before, so the terrain was completely unfamiliar. We also did not pay much attention to the word ‘Mountains’ in the title of the rally, which turned out to be quite crucial later… The terrain is mountainous, and the constant climbs were very tiring.

This was the first time we decided to come to the rally a day early and we do not regret it! As a rule, we got up around. 5 a.m. to set off by car at 6-7 a.m. to the rally's starting point. This time we could finally get some sleep and prepare in peace. We spent the night at a resort over Topornia Reservoir Near Przysucha. The resort does not knock, but it is enough to spend the night, have breakfast and leave things until the end of the rally. 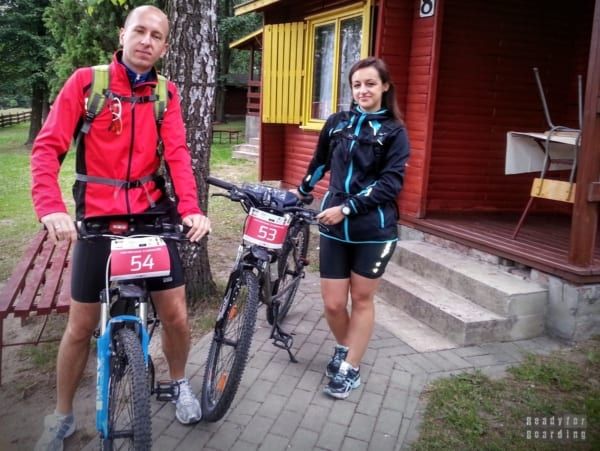 Around 9 o'clock we went to the start, where we saw a long queue for the registration itself. We fortunately arranged everything the day before, so we were left waiting for the distribution of maps. In the meantime, the organizers consoled us that this is one of the more difficult editions and this time on the mega route there are 11 points to collect, not 10 as before, and the optimal route is 50 kilometers. 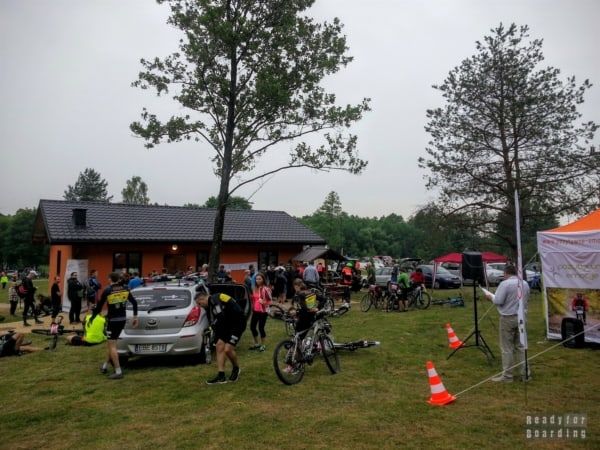 At 9:55 a.m. we finally got the long-awaited maps and just 5 minutes later we heard the whistle marking the start of the rally. We chose 11 points that seemed optimal to us and set off with most of the cyclists towards PK 2.

Already the first point showed us that it would not be an easy rally. Poorly marked trails, overgrown trails in the forest effectively hindered the ride. PK 2 was relatively easy to find, but this is probably due to the number of cyclists who went there (there was a queue at the point!), although the approach itself (not the climb) was sharp. We then drove towards PK 4, very much around the road, but at least on a dirt road (these are always more reliable in terms of quality). Many bikes suffered at PK 4, numerous branches and roots effectively hindered the passage along the route. There we modified our route and decided to go to PK 16, which was also reached by a hard road on which we could accelerate. After a short bushwhacking in the woods, we managed to find the point, and we liked most the cheers of another team with whom we passed in the first half of the rally 🙂

Next PK 13, which turned out to be unlucky for us… on the way we lost 3 of the 4 fenders 😉 Unfortunately the verges, uneven roads do their own thing, although we never had problems with them before. The point itself: a memorial plaque to partisans, sounded easy already from the name, but we did not expect such a trivial one 🙂 From PK 13 we set off to PK 17, abandoning the fenders in the forest, hoping to come for them in the evening. PK 17 was hidden on the site of a former mine. Here we also made another decision to change the route and headed to PK 8 – the bank of the stream on the east side.

It was real hardcore as they say 😉 The drive itself was hard, and the route was helped only by tire tracks on the grass that had been driven out. We left the bikes and looked for the point on foot from which it came out almost 1 km on foot and 20 minutes in the back. Walking along the stream was not without the standard adventures like falling into the water (how could it be otherwise, if Kamila had not fallen up to her knees! and twice 😉 ) as well as those completely unique: 20 meters from us ran a herd of beautiful roe deer! Eventually we managed to find the point. Those who drove from the other side had a much easier task… 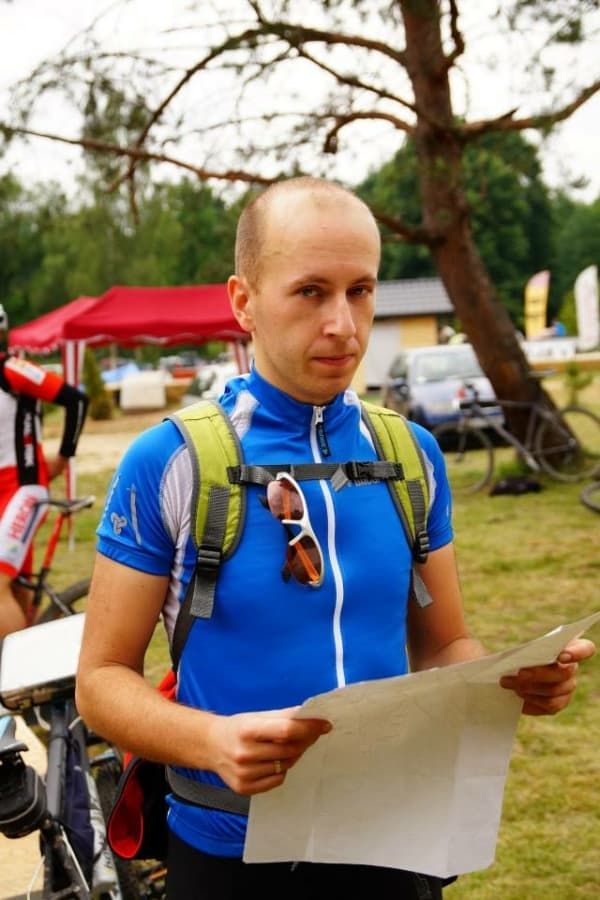 We then drove to PK 5 (pond), which we found without too much trouble, and only lost time looking for my glasses, which flew out on one of the numerous ditches. A quick return along the same route and we drove the long straight to PK 1, or buffet. Here waiting for us, as always, were fruits (we ran out of watermelons, which we thought about all the way 🙁 ), homemade cakes and drinks. It was fine, we only had 3 points left, so it was left to choose the order.

We drove to PK 3, which we feared the most – the intersection of ditches (I would say that the name intersection of ditches/bikes would be more appropriate ;-)). Initially, we wanted to take the black trail, but due to numerous roots, ditches and mud, we let it go and rode from the top, on asphalt. We sprinted off into the woods, measured the length and circled in a spiral shape (that's what it's like when you have three forks of a forest clearing every 50 meters), until by some miracle we managed to find the point. This was probably the biggest success, it took us only about 5 minutes 🙂 It was actually the only point in the area that we did not see any other rider…

After this point we jumped on the dirt road again and flew to PK 20 “Bottom”. Of course, there was a pit at the bottom in the area, but we managed to find the one with the lantern. We got back on the asphalt and rode as hard as we could to PK 9, which was trivial, but the view we saw at the top of Krakowa Góra was breathtaking! 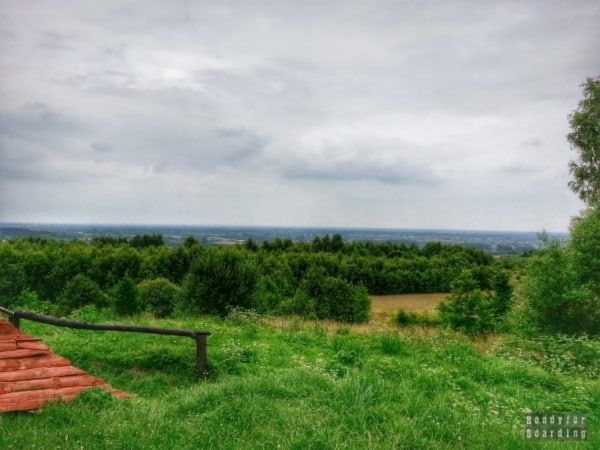 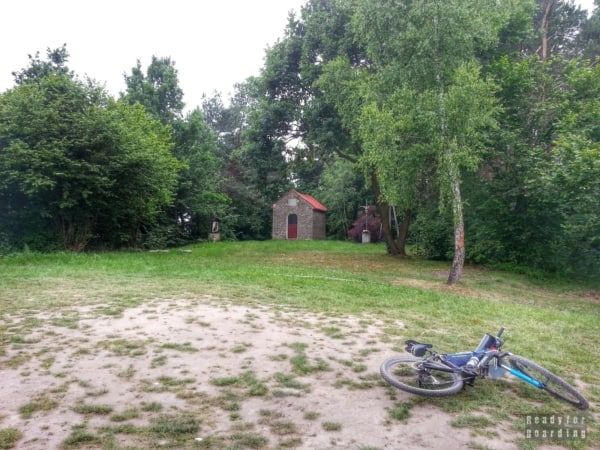 We had a set! 11 points, time admittedly poor, but we had the strength to still accelerate. Last time, we covered the route in 4:30, and now it was already 5:40 and we were still on the route, but we knew that PKs were more important than time. We were left to make one last decision, i.e. which way to go back: the longer way on the asphalt or “bike road” through the forest? Unfortunately, we were tempted by the “bicycle road”, which at first looked nice, but then turned into a forest with an endless number of passes and paths…

This short piece took us more than 20min! At times Kamila already felt like throwing the bike and running, because the hardest part was just carrying the bike through the mud, grass and bushes… When we finally saw the fences we accelerated to cross the finish line as quickly as possible. After more than six hours! 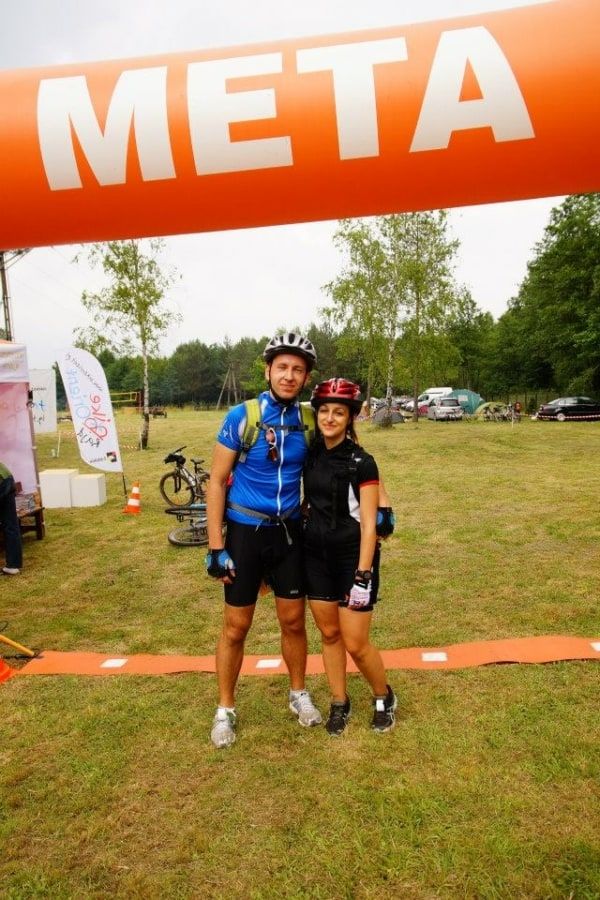 What was the surprise at the end when it turned out that Kamila is the second woman on the Mega route with a set of points 🙂 This only proves how difficult the route was.

The forest was very dense, most of even the second dirt roads were difficult to pass, and the seeps through the forest were practically invisible (knee-high grass, mud, byways, roots…). It was definitely our slowest over 60 km in the Bike Orient rallies… but we made it! 🙂 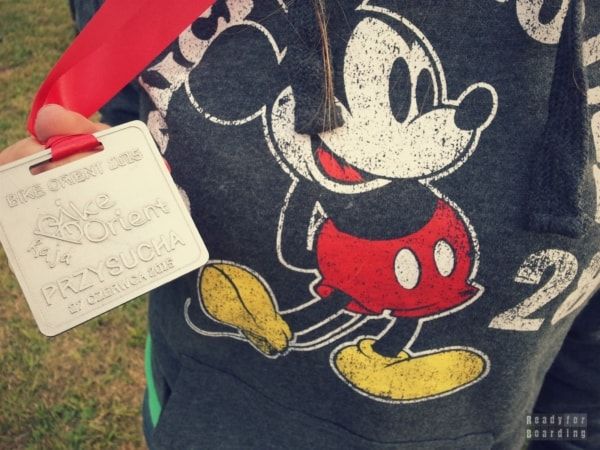 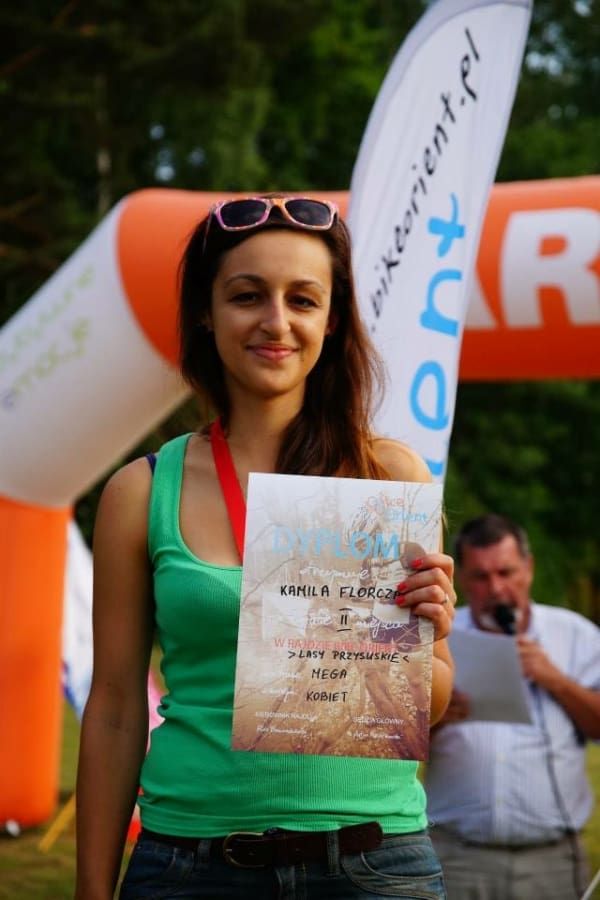 After completing the route, light gymnastics and stretching to not die the next day 🙂 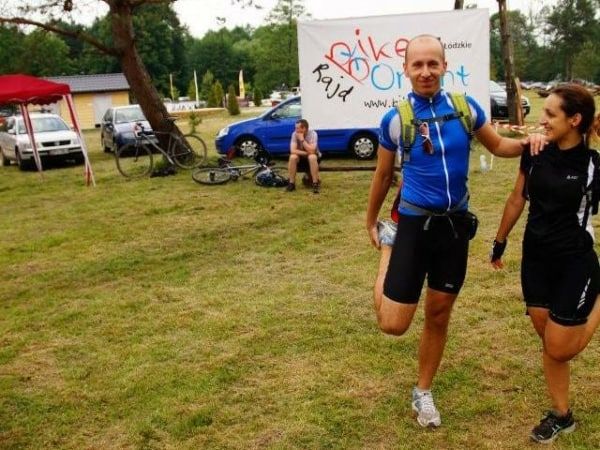 We stayed until the end. The organizers provided warm (tasty!) meal and a bonfire with sausages. It was possible to talk with other participants, exchange experiences and experiences 🙂 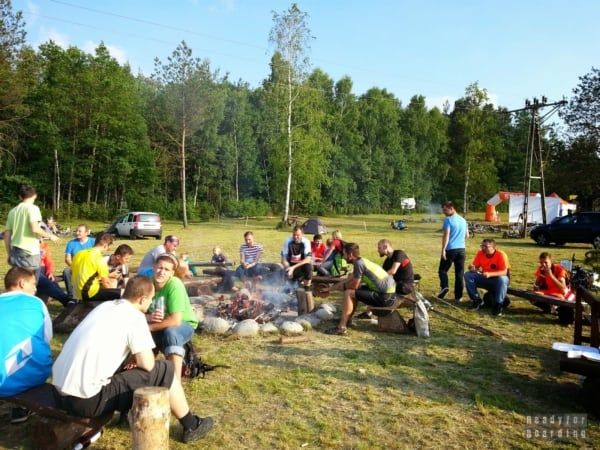 Then took place the presentation of medals and prize draw, although this time luck did not smile on us… We also failed to find fenders… Nevertheless, we return as happy as ever, despite fatigue and muddy and battered legs.

The route was extremely hard, but the weather was almost perfect for riding. If it had been nicer we probably would have stayed even until Sunday to relax a bit in nature.

Once again, we thank the organizers for the huge dose of emotions and good fun, until we fear what you will come up with at the next edition! And congratulations to all participants!

Finally, still our route (64 km) and the variant “optimal” (50 km). We took a slightly different option, but in our opinion easier nonetheless 🙂 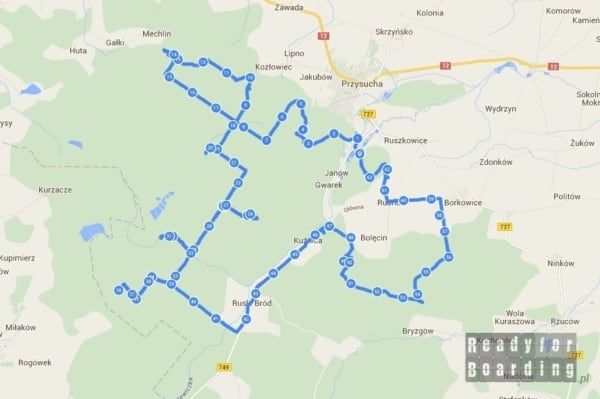 PS. Some of the photos are from the gallery of Mr. Maciej, the whole gallery is available here.