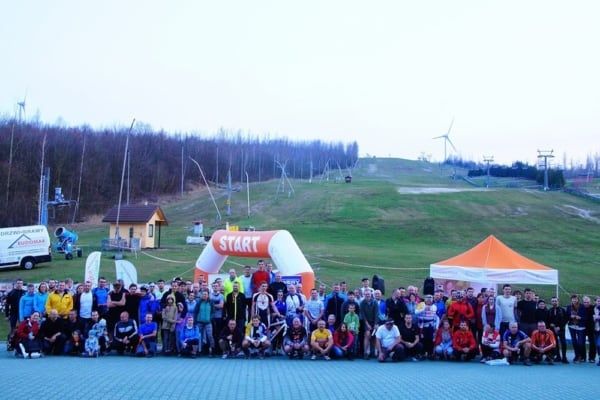 “ReadyForBiking”, or Bike Orient, Kamieńsk Mountain – we start the 2015 season 🙂

We like to spend our leisure time actively, usually on bicycles. On a free weekend, we loaded the bikes on the roof and explored different corners on singletrack. Sometimes to see new places, sometimes to relax, and sometimes we take part in bike rallies.

Just this past Saturday we kicked off the 2015 season at the Bike Orient rally near Kamieńsk Mountain (woj. Lodz).

It was not our first day on bikes this year. Previously, we were able to do a couple of kilometers “to start” so as not to sag on the first kilometers, but the weather this year did not spoil on the weekends, so we reinforced such as the. Spinning (or indoor cycling’iem as you prefer :-)).

The rally was organized on 11. April, and the competition area was the vicinity of the Kamieńsk Mountains. Unfortunately, we already had technical problems with the bikes since Friday… In the evening we saw that the inner tube in one bike went, and the spare does not quite fit, so the fun began 🙂 Eventually, we managed to make the bike run, so we went to bed ok. 1.00 at night to get up after 5.00. Quick packing, a decent breakfast and we set off in the direction of Belchatow. Along the way we passed a lot of cars with bicycles – the number of participants on the first rally exceeded the record number of 300 people.

Start numbers and small goodies from partners and sponsors were waiting for us on site. By godz. 9.30 We embraced and prepared the bikes for the start. The rules of the rally are trivial, and there are three types of routes to choose from: recreational, mega and giga. We started on the mega, on which you need to find 10 checkpoints (on the giga there are as many as 20), and the optimal route is 50-60 km (giga: 60-100). Optimal means that you actually do a little more, although this time we managed to fit within this range 😉 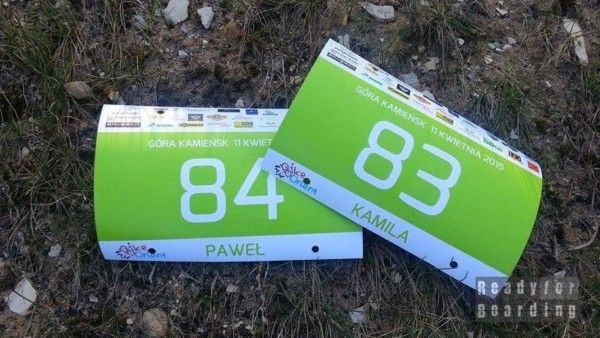 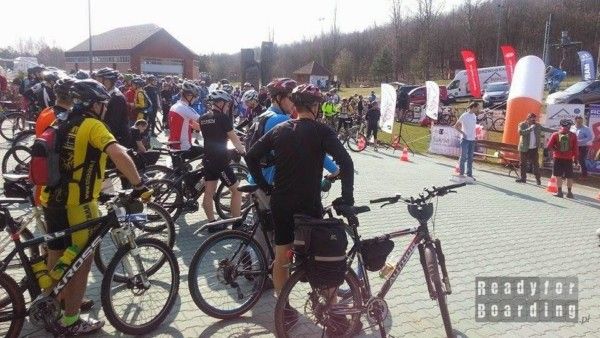 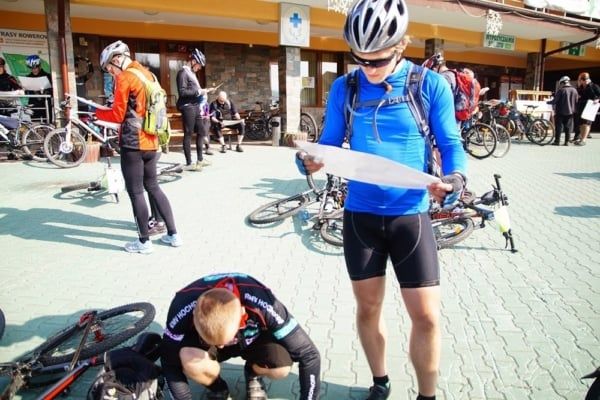 What we probably like the most about these rallies is that each participant rides the route he or she wants, and the order of scoring successive points is arbitrary. Initially, cyclists ride together in large groups, but very quickly the best ones come to the front 🙂

At 9 o'clock.50 We were given maps with checkpoints and had 10 minutes to choose the most optimal route. As it was not difficult to guess, some of the points (as many as 3!) were on Kamieńsk Mountain (386 m n.p.m.) and two questions remained: whether to take these points at the beginning or at the end, and how to conquer this mountain?! We were tempted by the lifts ;))) In the end we chose the sharpest climb (or rather approach) – we calculated the distances, the average pace and knew that it would be faster for us even to carry the bikes. At 10:00 more than 300 cyclists set off on the route. Very many people chose the same route as us. Unfortunately, the approach was at a steep angle, the bikes and the whole maypole were not the lightest either, so it was quite an effort at the very beginning. Fortunately, the point was easy to find.

The next point on Góra Kamieńsk was also easy, although the road no longer. Along the way, traditionally, I had to pass a small mudslide. 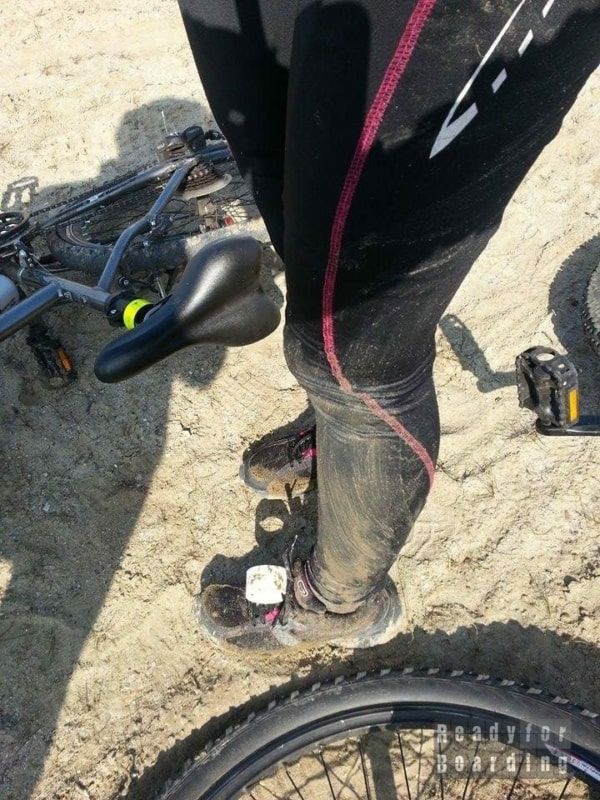 Our only regret is that we were in a bit of a hurry, so we admired the views with only one eye. And the weather was great! 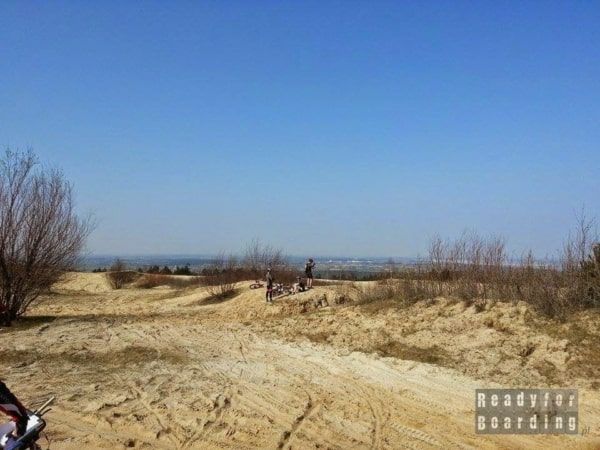 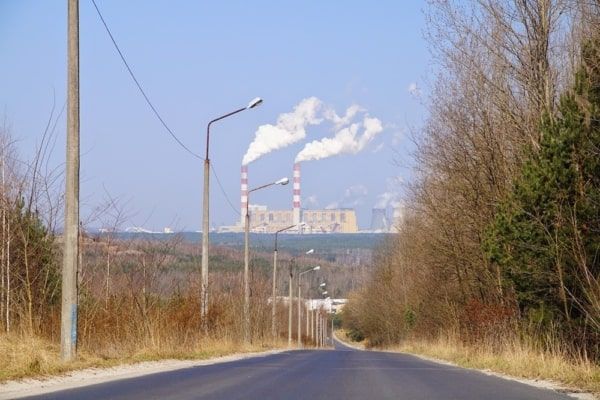 Fortunately, going downhill on asphalt was so much fun that it was worth the climb and getting a little dirty 🙂 Unfortunately, it later turned out that the descent cost us a broken wheel at Paul's, making the rest of the ride much more tiring. We had a choice of either replacing the inner tube or pumping every so often, which brought an improvement for the next 10km. After Friday's experience, we decided on the second option. The next checkpoints were easy to find (compared to previous rallies). The power lines were very helpful, allowing us to orient ourselves more easily (although it turns out that sometimes counting to 5 can cause problems 😉 ). 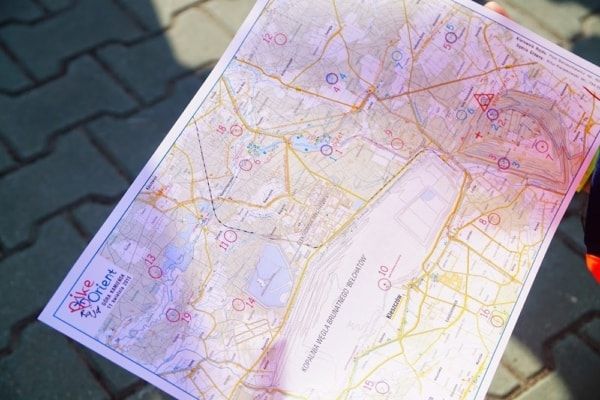 At each rally, the organizers provide a buffet, which is also a checkpoint. Going to this point, we already had half of the PK with a great time. We also passed the best participants who took the route the other way. At the buffet, TVN Meteo TV was waiting, so expect interviews with us 😀 After a short rest, watered and full, we continued on our way. Subsequent points were also not difficult to find, although you had to wade a bit through bushes, hills, pits, etc., but this is already standard at this type of rallies. Returning to the finish line without scratched legs is a shame 🙂

The last two points were agonizing with a broken wheel. Drove much slower and even despite the asphalts could not accelerate. There were also far fewer cyclists at these points, so we had to rely fully on our orientation in the area, which, it turns out, is not so bad 🙂 We may not have knocked down the speed on the route, but finding the points went quite well for us. After the last point, we set off with all our might to the finish line. Unfortunately, the climbs and the wind did not help. In the end we managed to reach the finish line after 4 hours and 30 minutes. In the process, we bet that we could close in four, but it did not work out… The main thing is that we had a set of points and plenty of impressions 🙂 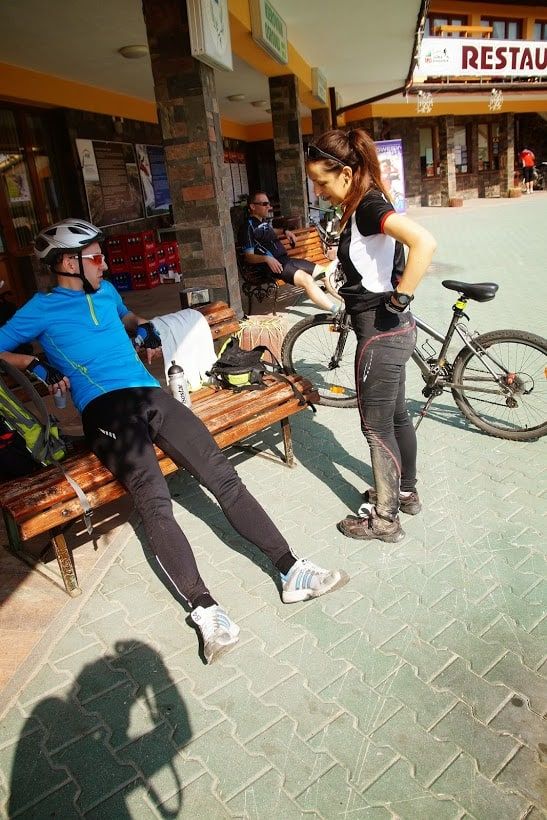 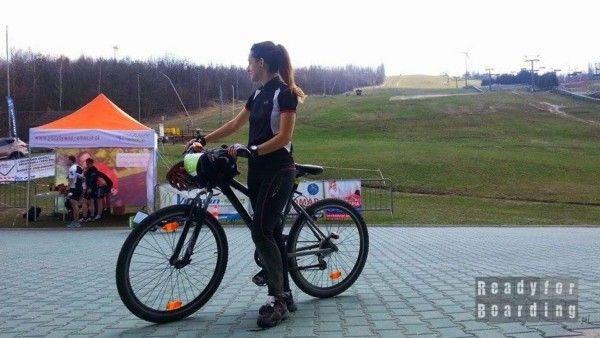 As it turned out later, I also had a punctured wheel. Barely after reaching the finish line there was no air in the front wheel at all. I do not know how I did it, but we have not had such a record yet in our cycling history (3 punctured wheels in 24 hours) 🙂

At the finish line, you could eat, refresh and finally rest. At the end there was an honoring of the winners and drawing of prizes. We are not professionals, we ride these rallies recreationally and yet those 4.5 hours were tiring. What to say the participants of the giga route, which takes less than 5:45 to complete 20 CPs, with more than 100 km on the road? Respect and congratulations to all the winners and participants of the Rally!

To the organizers, thank you for a great job, preparing the rally and all those attractions that awaited us. Great job! We are already looking forward to the next rallies, and we invite you all to participate in the next edition! 🙂

And finally, a few words on TVN Meteo Active about this edition, including some of our own 😉

So that we were not there… 😉 There is already a video report by TVN Meteo from the Bike Orient Rally. We have already mastered not only the Internet! :3

PS. Exceptionally not all photos are ours. Some of the photos are from the gallery of Mr. Maciej, the whole gallery is available here.